Some stories are told years after an event happens. It's the case for the memorable evening where Jean Beliveau scored his 500th goal, 40 years ago today, February 11 1971, at the Montreal Forum.

That night, Big Jean reached the milestone by scoring a hat trick, his 18th and last of his career, against rookie goaltender Gilles Gilbert of the Minnesota North Stars, guiding the Canadiens to a 6-2 win. Jean Beliveau was the fourth player to reach 500 after Maurice Richard, Gordie Howe and Bobby Hull.

At the time, he was undoubtedly the greatest centre of all-time. Some say he still is. A bit over three months later, Jean Beliveau would have a storybook ending to his career, winning a 10th Stanley Cup, fifth as captain, in a year where the Canadiens were not supposed to be champions.

From different sources, I've put together this video of Jean Beliveau's three goals against the North Stars and Gilbert, the third being the historic 500th (the TV play-by-play call is from North Stars broadcaster Hal Kelly).

At age 39, the Canadiens captain still displayed his tremendous talent. He scores the first goal of the night on a powerful slap-shot, having rushed onto the ice on a delayed penalty call against Minnesota . Goals number 499 and 500 are scored in a very similar way as Jean Beliveau dekes Gilbert and scores on his backhand. 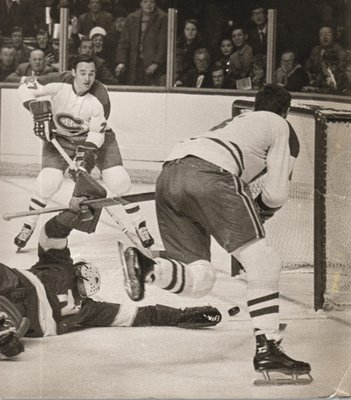 On the historic goal scored early in the second period, he was nicely set up by Frank Mahovlich and rookie Phil Roberto. Mahovlich, who had assisted on Howe’s 700th goal while in Detroit, was sitting on the edge of the crease and avoided temptation to ensure the puck went over the goal line himself. Beliveau’s backhand shot went in just inside the goal post.

The video shows part of the five-minute standing ovation Beliveau received from the Forum crowd and concludes with post-game dressing room footage of him being photographed with stick, puck, linemates, hat and banner, as you hear a commentary by journalist Bertrand Raymond.

Of course, next day’s papers covered the on-ice exploit. "I am certainly proud to be a member of the group with 500 goals", was quoted Beliveau in the Montreal Gazette. He added he was glad it was over with and he didn’t have the pressure to be stuck at 499 for some games.

In another article, Roberto is quoted: "Since I was a kid, I had Beliveau and Mahovlich as my heroes. I never dreamed I’d get to play on a line with them. And, as for assisting on Jean’s 500th goal, it’s too much. It’s terrific, the thrill of my life. " 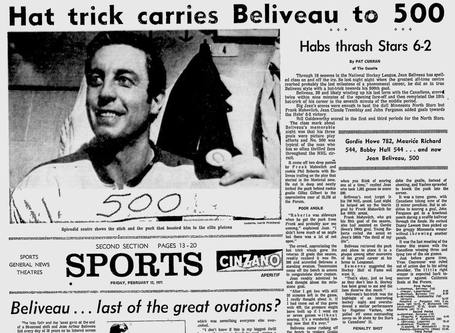 Not mentioned in the media reports at the time is a meeting between Beliveau and Gilles Gilbert, that probably occurred after the journalists and photographers had left. The goaltender explained what happened in a Jean Beliveau Radio-Canada televised biography broadcasted last year. Here is the clip of Gilbert, followed by Beliveau’s account. Written English translation follows. (The arena background for Gilbert’s interview might be explained by the fact that he works for Canadian Hockey Enterprises, who organizes hockey tournaments and schools in and the ).

Gilbert mentions that he met his parents in a specific area of the Forum after the game. "Then I saw Jean Béliveau. I thought, ‘what is he doing here?’ I think I’ve seen enough of him tonight. He came up to me and, almost apologetically, told me that it didn’t matter who would have been in net tonight, it was a night where everything went his way. He told me that I would have a long and successful career in the NHL, gave me his hand, and left. It’s special. I don’t think anybody else would have done that."

Jean Beliveau then says that he knew Gilles Gilbert because his father was a great hockey fan in . "Apologize? No,...when you have an opportunity, you have to try and capitalize," mentions Beliveau, who would reach the 700 assists and 1200 points milestones on February 20th 1971, in a 7-1 Canadiens win over the Chicago Blackhawks at the Forum.

Jean Beliveau is hailed as perhaps the classiest hockey player who ever lived and his words of encouragement towards Gilbert is a great example. As great a player Beliveau was on the ice, he was perhaps an even greater person off the ice.

A bit over a month after he had scored his 500th goal, the idol of so many was honoured by the Canadiens for that milestone and his whole career on Jean Beliveau night, held on March 24 1971, before a game against the Philadelphia Flyers (a 5-3 Habs win).

"Jean refused to allow us to give him anything like a car, or a cheque," said the late Habs GM Sam Pollock in the book "Lions in Winter". "So the Jean Beliveau Foundation was established, and he was able to donate $155,000 to the start-up fund that night." Officially, a first cheque of $155,855 was presented to him towards the foundation aimed at helping underprivileged children. Over a twenty year period, the foundation has distributed more than $1.5 million to young people in need. After Jean Béliveau retired from the Canadiens in 1993, the Foundation was transferred to the Quebec Society for Crippled Children, with strict instructions that the money be used to help children directly. 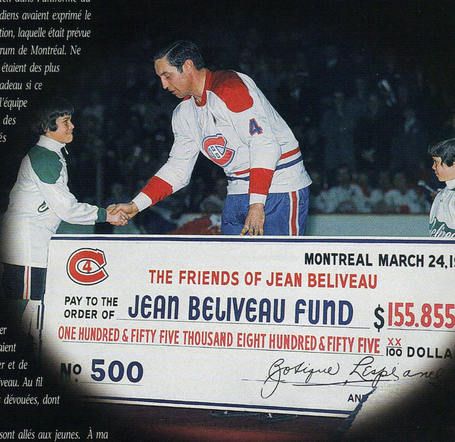 As for Beliveau’s prediction, Gilles Gilbert would have a pretty good career in the NHL. Most of his success came with but the Boston Bruins after he was traded there in 1973. But the Canadiens prevented him to win one or more cup in the seventies. And he would be victim of other famous Canadiens goals that he probably hears a lot about: Guy Lafeur’s tying goal in the closing minutes of game seven of the 79 semi-final and the subsequent Yvon Lambert winning goal in overtime.

Of note, Jean Beliveau’s 500th goal stick (seen with the puck in the opening photo) sold for $14 550.80 in February 2005, when he auctioned off part of his personal collection.

Special thanks to Kevin van Steendelaar for contributing to this post.