They are in the middle of the pack, in the NHL's Western Conference, but the Vancouver Canucks have been hot of late, posting wins in seven of their last eight games. Three of those wins have come via shutout. Their latest was a 6-0 pasting of the Colorado Avalanche.

Roberto Luongo and Cory Schneider shared the whitewash Tuesday night. Luongo was forced to leave the game after taking a puck to the throat. The Montreal native made the trip to his hometown, and will get the start in goal.

David Booth suffered an MCL sprain, following a knee on knee collision, on Tuesday and is expected to be out 4-6 weeks. Former Hab Chris Higgins is coming of a staph infection in his foot, and was not at the morning skate.

Bill Sweatt was called up from the Chicago Wolves (AHL) and will make his NHL debut tonight. The Canucks used defenseman Andrew Alberts on their fourth line in the morning skate,

Defenseman Kevin Bieksa lost a tooth, and loosened a few more, on Tuesday, but will be on the blue line for Vancouver.

Injuries aside, the Canucks still lay claim to two of the league's top-ten scorers in Daniel and Henrik Sedin. Vancouver's double threat have had good success against Montreal with Daniel recording 12 points in 16 games and Henrik 15 in 17.

The Canucks like to spread their goal scoring between home and on the road. 44 of their 89 goals this season have been scored in the opposition barn. That can't be good news for a Canadiens team that has won just four games at home this season.

The Habs are coming off what was maybe one of their worst games of the season, and easily their worst at the Bell Centre, a 3-2 shootout loss to Columbus.

No major lineup changes are expected, but Jaroslav Spacek could be ready for Saturday's game against New Jersey.

The Canadiens swept the Canucks last season, with Carey Price being spectacular in both games. 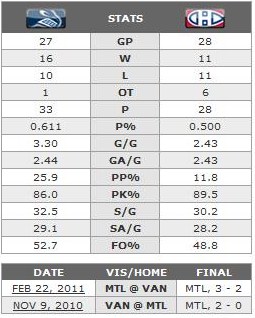