Do The Canadiens Miss Their Most Useless Player?

Share All sharing options for: Do The Canadiens Miss Their Most Useless Player?

If you asked Canadiens fans and media who the most useless player on the team is, you would likely get the answer Scott Gomez. If you ask that question here you will get a different response.

Last weekend I posted about process versus result and introduced how Fenwick results correlate strongly to playoff participation. As the league moves towards fewer powerplays, even strength production and possession becomes a strong predictor of future success.

The 2008-2010 Canadiens managed to succeed with poor Fenwick numbers because of elite special teams. With the hiring of Martin the possession stats began to climb to the point where I believed with a healthy roster that they were legitimate Cup contenders.

Even with the loss of Markov the Canadiens managed to avoid disaster and although the results indicated a desperate/terrible team, the process indicated every thing was okay. They were controlling the play for the majority of time and their Fenwick numbers were strong.

I noticed in my graphic on the weekend that the Fenwick number had steadily declined over the last 2-3 weeks. After last night's uninspiring performance against the Blue Jackets I wondered where the slippage began.

I looked at both significant Fenwick declines and they measured up consistently with local millionaire and whipping boy Scott Gomez's absence. This could be a coincidence, but Gomez has a strong history of positive puck possession so it could be that he isn't as useless as the fans believe. I used a couple scripts and crunched some numbers and came up with the following visual to display team Fenwick with and without Gomez. 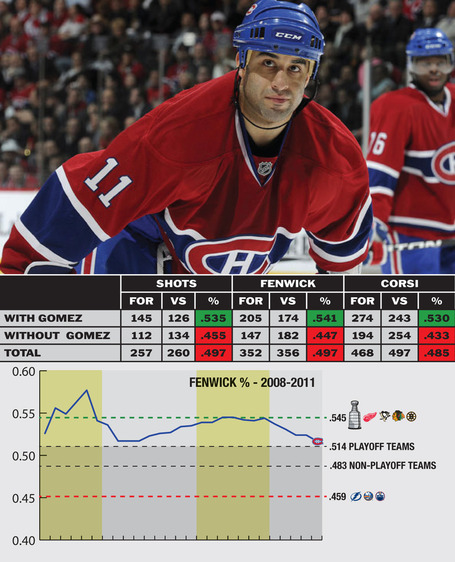 This visual is stunning in terms of Fenwick production (Gomez games highlighted in gold). With Gomez in the lineup the Canadiens have maintained a Fenwick % that is on line with the last four Stanley Cup champions (.541). Without him in the lineup it plummets to the level of league doormat (.433). I looked to see if there was any significant injuries that would coincide with his absence and there have been. Significant Fenwick horses like Andrei Kostitsyn (.559/3 games) and Max Pacioretty (.536/3 games) have been missing at different times, but they are somewhat offset by Mike Cammalleri's horrific Fenwick season missing 3 games (.457). At no point did any of their absences overlap.

I don't believe that one player is irreplaceable on any roster. If the Penguins survived without Sidney Crosby and Evgeni Malkin, then I certainly wouldn't submit that the Canadiens are struggling because of the absence of Gomez. Although his absence does pose problems that a ranting fan may ignore.

In the preseason, Stephan Cooper's preview pointed out that Jacques Martin likes to use Travis Moen on the second line to create a strong defensive unit with Gomez and Brian Gionta and open things up for the third line to take advantage of offensive opportunities. If that is the case, then losing Gomez alters the match-up plan. It heaps more responsibility on Tomas Plekanec, Lars Eller and David Desharnais and removes that depth advantage that looked to provide the Canadiens with a match-up edge.

As currently constituted the Montreal Canadiens are built around the "power vs power" concept. The best defensive centers are also the best offensive ones in Plekanec and Gomez and get used in a shutdown role. Meanwhile the two bottom line centers (Eller and Desharnais) are offensively oriented and will be expected to provide scoring against their weaker opponents.

The assumption here (EOTP) was that Desharnais may be exposed to tougher minutes and suffer. This has not been the case. David Desharnais' numbers have been substantially better in Gomez's absence.

Does that mean the Habs don't need Gomez? Maybe it does, but it might have something to do with DD being flanked by Cole and Pacioretty, consistently strong possession hounds. Desharnais has also had pretty stable linemates. Looking at the Canadiens forward combinations used this season, Desharnais has yet to play without one of Pacioretty or Cole on his wing. Desharnais has proven our assumptions wrong.

Brian Gionta has also been an absolute mess without Gomez, yet continues to fly under the anger radar.

Gomez is an important member of the Canadiens and Lars Eller is not ready to absorb the minutes that would open up should Gomez be part of a salary dump.

This is only a probing look into the recent decline and by no means is implying that Gomez was the sole reason for early season fenwick success. All of these numbers could be a coincidence based upon a small 28 game sample size, but I do think it provides food for thought on what Scott Gomez does provide the Montreal Canadiens. He will never provide the offense of a $7M player, but he does provide under rated value.