Game Thread: The Wiz is Back as Habs host Blue Jackets.

Share All sharing options for: Game Thread: The Wiz is Back as Habs host Blue Jackets.

The Columbus Blue Jackets are not having a memorable season. Already nine games below .500, things aren't great on the road where they are 2-11-0 and have been outscored 53-28.

The Blue Jackets are 27th five on five and 28th on the penalty kill. Their power play is just a hair (0.7%) better than the Canadiens.

Was acquiring the rights to James Wisniewski and then signing him for a ridiculous salary expected to turn things around for then team? Not really, but despite missing eight games due to a suspension, the Wiz has 12 points in his 18 games, with five helpers on the power-play.

Much like the Canadiens, injuries have been a big problem in Columbus.

The Blue Jackets' other big off-season acquisition, Jeff Carter, missed 10 games earlier this season and missed Sunday's practice with an ankle sprain. He is listed as day-to-day but could play tonight. Carter has 15 points in 22 career games against Montreal.

The Blue Jackets have gone 2-13-1 with either Carter or The Wiz not in the line up.

Just as Carter went down Kristian Huselius, a perennial 20 goal scorer, returned from a pectoral muscle tear, making his season debut on Friday.

Derek Brassard is also a healthy scratch tonight, and speculation is that the BJ's first round pick in 2006 is on the trading block.

Getting behind out of the gate is one of the Blue Jackets' biggest problems, dead last in the league, at 1-12-2, when their opponent tallies the first goal. They are 5-2-0 when leading after two periods, but have been outscored 32-21 in the third period.

Steve Mason has been atrocious between the pipes and former Hamilton Bulldog Curtis Sanford has stepped up with a 4-3-2 record (2.10, .926).

The two teams will continue to face each other once a season, based on Mondays four conference realignment by the NHL's Board of Governor's. The Blue Jackets, who are in the Eastern TIme Zone, had made a push to jump to the Eastern Conference.

Max Pacioretty is back in the Canadiens lineup, having served his three-game suspension.

Louis Leblanc was back on the fourth kine during Mondays practice, raising the eyebrows of the Jacques Martin criticizers, after Leblanc seemed to find some chemistry with Lars Eller.

Chris Campoli was given the go ahead for contact in practice, but will not suit up tonight. 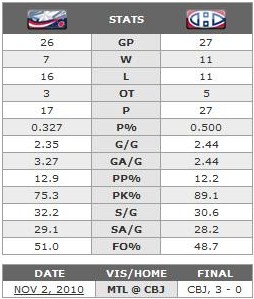 Blue Jacket talk at The Cannon