Fear and Loathing in Montreal

Share All sharing options for: Fear and Loathing in Montreal 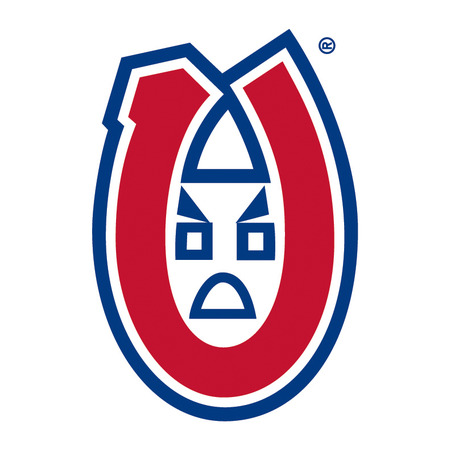 For somebody growing up outside of Montreal I was of the belief that I was missing out because I lacked access to a media that covered the Canadiens. When Montreal Canadiens communities sprung up all over the web and the Gazette entered my radar I thought all my problems were solved.

The only difference that I noticed between the two franchises was totally based on environment. One fanbase was spoiled, one was longing to be spoiled. At one point in time a Canadiens fan was justified to be arrogant, entitled and dismissive of Leaf fans and Leaf fans were justified in being envious, jealous and resentful. Those days are no longer valid, yet they still exist because of environment.

This environment of expectation continues to poison todays coverage of the Canadiens. As of right now the Canadiens are 3 points behind the Leafs, one city is going crazy with blame, fear and prophecies of disaster, the other fanbase is puffing out their chest and printing off Kessel for MVP t-shirts.

All of this is emotional irrational behaviour and analysis.

The one thing that I feel seperates EOTP from the majority of communities is the level headed, rational and researched opinions that set the stage for allowing the real time narrative to set itself. There is a nice balance of math and game analysis to avoid major meltdowns

Results and Process need to be seperated. When they aren't and you sprinkle in emotional distress you get panic.

I am tired of hearing what Montreal's record needs to be in order to make the playoffs. Fans view the season as linear with a definitive beginning and ending, but the season needs to be viewed as 82 different events worth 2 points.

It seems sensible to write something like this if you view it in this manner.

The Canadiens’ 25 points represent 48.1 per cent of what they could have garnered through 26 games of the schedule. To reach 96 points, they will have to rack up 63.4 per cent of what’s available the rest of the way.

This statement represents that it is unreasonable to expect a team that is barely .500 to be able to play .634 hockey the rest of the way, but that thinking defines what the Canadiens are after 25 games and then sets that expectation on what seems like an unreasonable goal. This is result based analysis and not process based.

We can do this all season to varying degrees. If we did that with the Bruins only 33 days ago we would be presented with this....

The Bruins have played at a .300 rate, in order to finish with 96 points they will have to play .642 hockey in order to qualify for the playoffs. To put this in the proper perspective, the Bruins only played .628 hockey when they won the Stanley Cup. Tall order right?

The Bruins have played at a .688 rate, in order to finish with 96 points they will have to play .543 hockey in order to qualify for the playoffs.

Who are the Bruins? Are they defined by 10 games or 25 games? This sample size is way to small to make these type of definitive statements.

The original statement places the Canadiens on an island and ignores the fact that the teams in their vicinity have to also play at a similar rate to amass 96 points.

Let us assume that with 55 games remaining that the 3-4 points the Panthers, Bruins, Rangers, Penguins and Flyers own on the Canadiens are unassailable. In order for the Canadiens to accomplish the impossible dream they need to win ONE more game than Washington, Ottawa, NJ, Winnipeg and Tampa to gain 8th place. If we dream even higher it would only require TWO full wins more than the mighty Maple Leafs?

Now which statement exists in the world of negativity and hyperbole and which is centered in the narrative of reality? Why paint a narrative of doom and gloom when we can look at the rest of the field and assess the situation with perspective?

Why is it necessary to define playoff success and probability with 55 games left?

Today the Canadiens are viewed as a 46% chance to make the playoffs at sportsclubstats. I believe that it is a strong probability tool, but not with a 25 game sample size. It bases it's strength of schedule based on limited data, at this point in time the program will project a March game against the Wild as a likely loss because of their quick start and a game against the Canucks with a more probable victory.

Seven of sixteen 2011 playoff teams dropped below the Habs current probability level after December 1st. Almost half the playoff field was viewed as less than a 50% probability to qualify.

The Canadiens were at 94% last season at this point, did that stop the negativity and expectation that they would somehow miss the playoffs in March or April last year?

Why not look for indicators in which the process might lead to future success?

If you are a regular at EOTP you will be familiar with Fenwick%, PDO etc. and our positive outlook on the Canadiens as we attempt to measure process instead of result.

Using scripts provided by sites like timeonice and behindthenet it is easy to find even strength possession numbers and assess how important they are to future performance. (The scripts only cover the last 4 seasons, so these results are based on years 2008-2011.)

For the better part of a decade the Canadiens have been an extremely poor possesion team, even during the 2008 season when they won the East their possession numbers were mediocre (.471%).

Their poor play 5 on 5 was offset by an elite powerplay unit. Even though the majority of fans would love to see Jacques Martin fired he has managed to take the this team and transform it into a team that has the puck more than it's opponents, takes more shots and creates more scoring chances. Even when the Canadiens were struggling early in the season the process was sound and the results were skewed.

Below are the average fenwick rates of the past four Cup champions, the last 64 playoff teams, 56 non-playoff teams and the bottom feeders of the NHL. (Fenwick rates are measured in close games to minimize score affect).

The Canadiens have had a playoff worthy Fenwick rate all season and for long stretches it qualified among the elite. All of this has been accomplished with four defensemen who hadn't played more than 2 NHL regular season games before October 2010.

So the question becomes how relevant is Fenwick to playoff success? 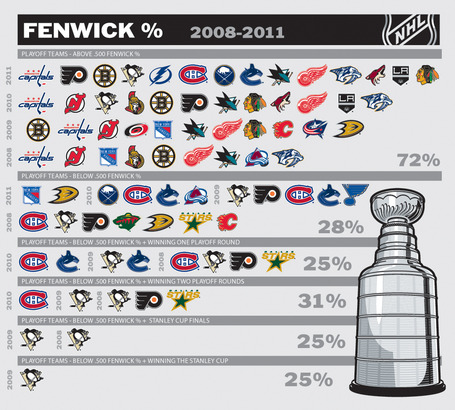 72% of playoff teams over the last four seasons have had a +.500 Fenwick %. 8 teams with a sub .500 % have managed to win a playoff round and all of them possessed strong to elite special teams to offset mediocre fenwick numbers. Only one team managed to win the Stanley Cup and the 2009 Penguins percentage was .499. If you isolate the Penguins number with the return of Sergei Gonchar and the hiring hiring of Dan Bylsma the number improves to .549, similar to the average rate of the past four champions.

If you search for negativity, confirmation bias will lead the way. The Canadiens trail the Leafs by 3 points and the media would have you believe that this season is a disaster. Down the 401 the media is printing playoff tickets and could care less that the Leafs are a prime candidate for regression.

There are enough real problems to be concerned with (ie. Markov's health, poor luck or lack of finish), so why try to manufacture panic?

Avoid the mob mentality. The media is setting fire to cars and looting the city, joining in will not make things better it will create a bigger mob and more damage. Barring more injuries, this team will make the playoffs.