Share All sharing options for: Game Thread: Habs and Panthers Close Out 2011

This is the second meeting between the Florida Panthers and the Montreal Canadiens this season.

The Panthers have certainly been the surprise team of the NHL this season, currently sitting 3rd in the Eastern Conference. It's a remarkable feat considering their goal differential is at minus 5, which is 7th amongst the top-eight teams in the Conference. Those 7 "losing points" (tied for most in the league with Montreal) really makes a difference in the Southeast Division.

In the last encounter between the two clubs, Jacob Markstrom stole the show with a 40 save performance. Think it will happen again? No it won't, as Markstrom is getting further seasoning in the AHL.

In the meantime the Habs will see and old face in Jose Theodore. The former Hart Trophy winner was to have Friday night off, but was pressed into service when Scott Clemmensen was pelted for three first period goals, in a 4-1 loss to the New York Rangers. Theo hasn't had a lot of success against the Habs, going 2-2 (4.81, .858) with a shutout.

Jason Garrison leads NHL defenseman with 10 goals. SunMedia's Chris Stevenson reported that his weapon of choice is a Bauer Apex stick with a 110 flex and a bit of a toe curve.

None of the Canadiens skated today, with Randy Cunneyworth keeping the team at the hotel.

Some pre-game reading from the Miami Herald's George Richards

Did You Know?: Panthers coach Kevin Dineen and Habs interim coach Randy Cunneyworth were both winers of the AHL's Coach of the Year Award. Dineen won with the Portland Pirates in 2006, with RC winning the season prior with Rochester. Both played for the Hartford Whalers. 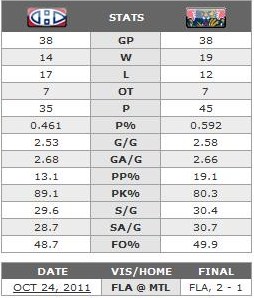