Share All sharing options for: Game Thread: Habs Hope For a .500 West Coast Trip vs. Kings

The Montreal Canadiens will be looking to salvage a .500 record on their swing through California, with a win over the Los Angeles Kings this afternoon.

P.K. Subban will not have to deal with Mike Richards this afternoon. The Kings center has been placed on injured reserve, due to a shoulder injury suffered Thursday against the Florida Panthers. The timing couldn't be worse for LA, as Richards had 9 goals in his last 11 games.

They did get some good news that Dustin Penner has been cleared to play, after missing nine games with a hand injury.

Jonathan Quick has been outstanding in goal for the Kings, and a huge reason for the team's start this season, but is winless (0-2, 3.52, .860) against the Canadiens in is career.

Quick had a busy night Thursday however, so Jonathan Bernier is getting the call in goal.

Still no Andrei Markov for the Habs, and not for a while now. Canadiens GM Pierre Gauthier spoke to the media pre-game and announced that the defenceman will need minor arthroscopic surgery on his knee. He is expected to miss a minimum of three weeks.

Markov saw a doctor in Los Angeles, and will travel to Florida for the surgery to have some debris removed. Overall Gauthier said that Markov's knee structure is strong, and the leg is almost as strong as the other leg.

Getting behind in the game will not be a place the Canadiens will want to be this afternoon. The Kings are 9-0-1 when leading after two periods. Conversely, the boys from LA-LA land are 0-7-1 when trailing after 40 minutes.

Carey Price is 2-0 (2.01, .930) in his career against the Kings, with both appearances coming at the Bell Centre. This will be his first career start in Los Angeles. 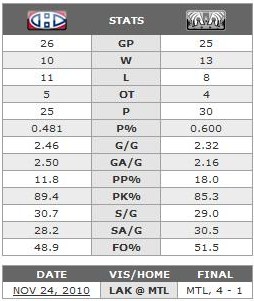