The Canadiens visit the Tampa Bay Lightning for their first meeting of the 2011-12 season. The two teams will see more of each other in the future, when they become division rivals.

The Lightning, with a cast of former Habs players, "dream players" and "the dream coach", have been struggling even worse than the Canadiens of late and sit a pair of games under .500.

Tampa's power play sits at 14.6%, not much better than Montreal's, while their penalty kill is a middle of the pack 81.2%. The loss of Mattias Ohlund, out all of the season thus far (knees), is a major impact on the Lightning's penalty kill concerns.

In the meantime, their top offensive players are picking up the pace for a potential turnaround. Martin St. Louis has a five-game point streak (3-3-6), Vincent Lecavalier has six points in seven games and Steven Stamkos has nine points in his last six games.

The Canadiens haven't announced any changes in their lineup, so Chris Campoli and Yannick Weber will be healthy scratches.

Top-10 signs the Habs are in Florida from Rick Keene. 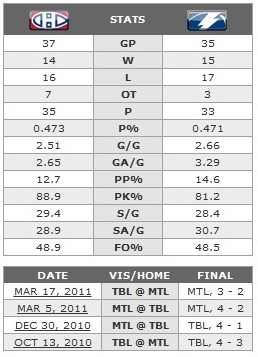 Lightning talk from our awesome SBN partners at Raw Charge