Game Thread: Habs back at it as they visit Sens

Share All sharing options for: Game Thread: Habs back at it as they visit Sens

So did Pere Noel leave a win ticket in Randy Cunneyworth's stocking? We'll find out tonight as the Canadiens try to get back on track against the Ottawa Senators.

Coach Cunneyworth made some changes up front, during Monday's practice. One big change was bringing Lars Eller out of his one day press box banishment, and centering him between Max Pacioretty and Erik Cole.

Mike Cammalleri has been dropped to the third line, but it's not necessarily a demotion. He's had chemistry with David Desharnais earlier this season, and will still see power play time. Louis Leblanc will be on the opposite wing.

Early last December Jacques Martin benched P.K. Subban for a couple games. The rookie responded with 13 goals and 28 points the rest of the way. Will Cunneyworth's one-game benching get the same message to the sophomore this time around?

Carey Price gets the start for the Habs.

The Senators have gone 3-1-1 in their last five, and will have Milan Milachek back from a concussion.Milachek leads the Sens in goals (19) and has five points in 13 career games against the Habs.

Craig Anderson made 36 saves in a 2-1 OT loss against the Carolina Hurricanes on Friday, and gets the call against the Habs. Anderson is 2-0-1 over his last three starts, with a .938 save percentage, but was on the losing end of the only meeting this season against Montreal.

Defenseman Chris Phillips is out with an undisclosed injury. 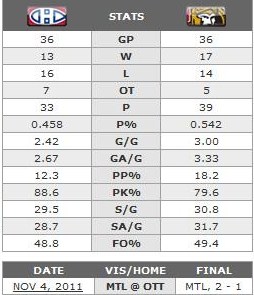