Share All sharing options for: The Quebec Goaltender advantage 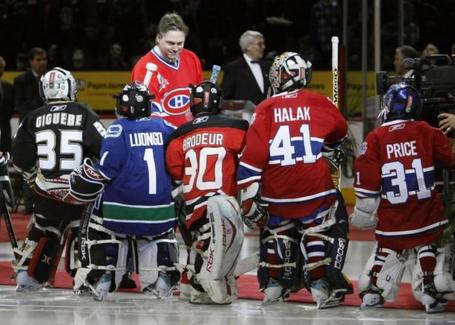 Where have all the Quebec goaltenders gone?

Eric Duhatschek posed this question in today's Globe and Mail and offered up the same conclusion that the majority of media has assumed for over a decade.

Suddenly it was cool to be a goalie in Quebec. The best athletes gravitated to the position, and although Roy didn’t have a huge influence on Martin Brodeur, who was well on his way by then, he did on the players who came next.

The simple answer isn't that "the best athletes" went into the crease, it is that the best training in the world was centered out of Montreal and Montreal happens to be located in the province of Quebec.

Take a look at the list of goaltenders he names

By 2001, more than half the teams in the NHL had either a starter or a backup from Quebec. Beyond Roy, Brodeur and Giguère, there was Martin Biron, Manny Legace, Patrick Lalime, Manny Fernandez, Felix Potvin, Stéphane Fiset, Marc Denis, Mathieu Garon, Jose Theodore, Eric Fichaud, Jocelyn Thibault, Jean-Sébastien Aubin and, oh yes, a young Roberto Luongo, just breaking in with the Florida Panthers. 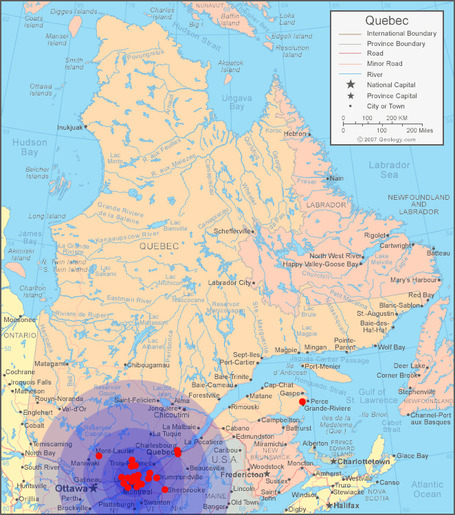 Do you see a trend here?

Malcolm Gladwell explained things nicely in his book Outliers. Everybody is pretty familiar with his essay about 10,000 hours and the work required to become elite at any endeavour. He also discussed the fortunate breaks that you need in conjunction with your hard work. One of the strong examples he offered up was Bill Gates

Why is Bill Gates a billionaire? He's smart, of course, and he has tremendous ambition. But he probably wouldn't have started Microsoft (MSFT) if he hadn't been born in 1955. That made Gates old enough to take advantage of the opportunities that opened up with the introduction, in 1975, of the Altair 8800, the first do-it-yourself computer kit. But he wasn't so old as to be too settled in his life to take a leap of faith.

Gates also was fortunate to attend Lakeside, a private school in Seattle with its own computer. The Lakeside machine was one of a new generation of computers that shared processing power with a much larger computer downtown. That meant he could learn programming without being slowed by the laborious punch-card process used for computers just a year or two earlier. Gates had thousands of hours of programming under his belt when the Altair became available, making him perfectly prepared to take maximum advantage of the PC revolution.

Coincidence? Microsoft co-founder Paul Allen was born in 1953, Apple (AAPL) founder Steve Jobs in 1955, and Sun Microsystems (SUNW) founders Bill Joy and Scott McNealy in 1954. All of these Silicon Valley pioneers succeeded not just on their extraordinary talent but also because they had the right opportunities at exactly the right time.

Doesn't this seem to be a better explanation than "the best athletes in Quebec were inspired by Roy to become goaltenders"? The greatest goaltender in the NHL, a player who revolutionized goaltending by altering the philosophy and altering his equipment to emphasize these changes in philosophy is stationed in the city of Montreal. The goaltender coach who helped with the evolution is running a goaltending school in the city of Montreal. A young generation of goaltenders were not only influenced by their idol Roy, but were in the epicenter of the revolution while it was happening.

The initial impact was felt in Montreal and it's surrounding areas. As the exposure to the system increased, the amount of goaltenders from Quebec declined. It was a blip on the chart and unsustainable. It was also a product of it's generation. In 1990 the only individuals who were receiving this advanced instruction were kids with late 70s and early 80s birthdates who lived in Montreal or it's surrounding areas. It wasn't a talent explosion, it was a generation of kids who were fortunate enough to have been born in the right area at the right time to exploit a systematic weakness.

Today a revolution cannot be centered in one area for too long. If you go on to youtube and type in goaltender instruction you will get thousands of tutorials from all over the world. The same type of evolution is happening today. Five years from now the majority of goaltenders are going to move as effortlessly as Carey Price, but because of technology, collaboration and access to information it is unlikely that it will be centered in one general area like it was in the year 2001. 25% of the goaltenders in the league came from a three hour drive from Montreal.

Duhatschek implies that Finland has a disproportionate amount of goaltenders in the NHL today, but Finnish goaltenders make up only 8.2% of the NHL's goaltender union. The population of Finland is over five million and the only goaltenders within the same city are Kari Lehtonen and Niklas Backstrom from Helsinki and Antti Niemi from just outside in Vantaa. Contrast that to the Quebec Goaltenders in which 9 of them were from Montreal and (outside of Garon from Chandler, Quebec) the furthest goaltender among the remaining 10 was three hours away in Quebec City.

The Quebec goaltender explosion was an outlier. The question isn't where did it go? The more interesting question is how did it happen?