It was bad enough the Montreal Canadiens had to face, and fall flat against, the Eastern Conference leading Boston Bruins on Monday. Things don't get any better for them tonight, as they visit the Chicago Blackhawks.

The Canadiens, so far this season, have yet to lay claim to a 15-goal scorer. The Blackhawks have three, as well as four players over 30 points. Tomas Plekanec is the closest the Habs have right now at 26 points, while Cole is the closest to the 15 goal mark with 13.

Corey Crawford has been less than spectacular this season for the Blackhawks, and makes his second career start against the Habs. His first appearance was a 2-1 overtime loss on April 5 at the Bell Centre. Ray Emery had made the last six starts for Chicago, winning five straight until the Penguins snapped that streak last night.

Daniel Carcillo (head injury) missed Wednesday's game against Pittsburgh, and is out tonight.

Interesting Stat: Via Heather Engels on Twitter; The Habs are 3-2 in the opening half of back-to-back games this season. The Blackhawks are 5-1-1 on the back end. 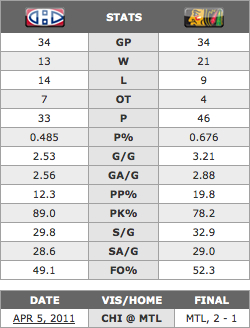 View from the other side at Second City Hockey