Bad enough it was a west-coast game on a Thursday night, but tack on five minutes of overtime and a 6 round shootout and it makes for a long night for Canadiens fans. It feels even longer, as the San Jose Sharks continued their home ice supremacy over Montreal with a 4-3 win.

Joe Pavelski's change-up beat Carey Price five-hole to ice the victory fir the Sharks, who have won their last six meetings with the Habs at home dating back to 1999. That will carry on at least another two years, barring any Stanley Cup Final match-up, based on the current scheduling format.

Mike Cammalleri opened the scoring, hiding in the crowd in front of Antti Niemi and tipping in a P.K. Subban shot at 13:21 of the first period.

The Sharks responded 41 seconds later, after a Canadiens transition hit a snag, allowing the home team to recover. With the Canadiens forwards caught up ice, the Sharks had time to set up and finished it when Jamie McGinn slapped in a Michal Handzus pass.

David Desharnais put the Habs back in front, after a slick no-look backhand pass by Erik Cole send him racing solo in on Niemi at 4:41 of the second period.

The Sharks bit back as Logan Couture found the open space in front, and used Yannick Weber as a screen, to beat Price at 6:18.

Desharnais returned the favor to his Canadiens line-mate, at 8:45 of the third period, to put his team back in front. After stripping Joe Thornton (Yes, Joe Thornton!) behind the net, the tiny Habs forward wrapped the puck in front to a waiting Cole.

With a 1:26 to play, a talent laden team managed to tie it back up. Price was unable to handle a Martin Havlat shot, and with Couture on top of him, let it slide away to a waiting Ryane Clowe.

It's was clearly a goal that the Canadiens goaltender wanted back, especially after the busy night he had. The Sharks fired 41 pucks at the goal, had 23 blocked and another 18 miss the net. Price had to be brilliant on multiple occasions, including the overtime.

The Canadiens will stay in San Jose over night, before heading to southern California Friday. They face the Los Angeles Kings on Saturday afternoon (3:30 EST). Don't ask if Andrei Markov will be playing or not. Nobody seems to know. 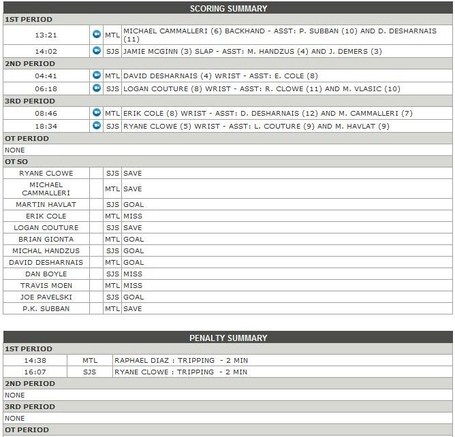 The Sharks dominated the faceoff dot all night, something they do rather handily at home. They were 39-23 on the night. Logan Couture schooled Tomas Plekanec with a 14-5 margin.

They are also a team strong at driving the net, and the tying goal was an excellent example of that. Their biggest down side on the night was 22 turnovers. Two of those led directly to Canadiens goals.

One of the best highlights of the evening for me was listening to the CSN coverage of the game. One of the best in the NHL, the Sharks play-by-play crew of give an unbiased perspective of the game. They even turned things over to RDS, during the second period, to give their viewers a bilingual experience.

On the Montreal side of things, Louis Leblanc had 14:25 TOI. Though he had no shots on goal, it was visible that he is just a step or two from making it to the NHL level or, as one comment in the game thread noted, capable of faking it.

Alexei Emelin had 5 hits on the night, the biggest of the game came against Pavelski.

There were only two penalties all game and for a change the officials seemed to run a solid 65 minutes of hockey.

Anyone notice that the first four shootout attempts on Carey Price went blocker side?

Travis Moen as your fifth man in the shootout?

Winning reaction from Fear The Fin and Battle of California

In case you didn't stay up..