Game Thread: Habs hit the road with visit to Bruins

Share All sharing options for: Game Thread: Habs hit the road with visit to Bruins

The remaining six games for the Montreal Canadiens in December will be on the road. Anything worse than a .500 record in this stretch, and it could mean, barring a miracle run in 2012, that the Habs will be on the outside of this season's playoff picture.

This past Saturday, the Boston Bruins dismantled the same Philadelphia Flyers team that defeated the Canadiens last Thursday night, and ultimately led to the dismissal of Jacques Martin.

The Bruins victory was their fourth straight and put them back on top of the Eastern Conference standings. Suffice to say, their Stanley Cup hangover is well past over.

The Bruins Milan Lucic had a phone hearing with the NHL's head of discipline Brendan Shanahan Monday morning, following his hit on the Flyers' Zac Rinaldo . This is the second time this season that Lucic has faced potential disciplinary action.

Update: Lucic has been suspended for 1 game. "I'm not happy. But I have to respect the decision," Lucic said. Sucks that I can't face a rival like the Habs tonight."

Rich Peverley has six points in his last three games for the Bruins and defenseman Joe Corvo has five points in his last four games. Cup of Chowder notes that Peverley could be a game-time decision as he is battling a nagging injury. Gregory Campbell could also be in the lineup.

P.K. Subban is a game-time decision with the flu, and Raphael Diaz is expected to return to the lineup but it is unclear if he will if Subban is in. RDS' Renaud Lavoie tweeted around the 5pm hour that Subban was feeling better.

Lavoie also tweeted he has an exclusive on the Habs at 6:30pm. 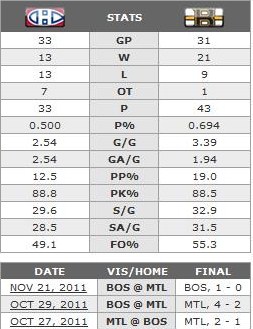