Randy Cunneyworth gets his first taste as Habs bench boss tonight, as the Canadiens host the New Jersey Devils.

The Habs beat the Devils in East Rutherford last week, when Jacques Martin was still coach. So what happens if they lose tonight in their own barn? Oh let me answer that, the Luc Gelinas and Yvon Pedeneaults of the French media will be right on Pierre Gauthier for hiring an anglophone.

There was some interesting reaction around the Habs locker room, with several players saying that Martin's firing was a strong message to the players.

"We've been underachieving all season and changes have to be made, but Jacques is not the reason we're not winning games," said Erik Cole. "It's a good wake-up call that we need to play better."

Lars Eller echoed Cole's, thoughts. "It's not OK to be just OK. We have to be good."

Meanwhile, not much has changed with the Devils since last week's meeting. They've won three straight this week, and are coming off a 6-3 win Friday over the Dallas Stars.

Zach Parise continues his hot scoring touch, and had four points last night. The Devils' winger has 11 points in his last 16 games.

Travis Zajac made his season debut on Friday. Defenceman Henrik Tallinder did not play Friday, due to back spasms, and will be a game-time decision tonight.

The Devils have won six straight at the Bell Centre. Martin Brodeur has been in the crease for five of those wins, allowing just five goals. 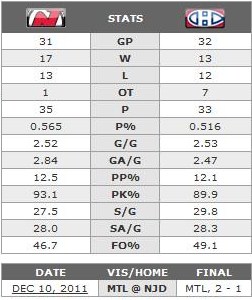 Devils Chat at In Lou We Trust