Game Thread: Missing stars aside, Flyers will be tough test for Habs

Share All sharing options for: Game Thread: Missing stars aside, Flyers will be tough test for Habs

Canadiens fans won't need to worry about perennial Habs killer Claude Giroux, when they face the Flyers tonight. Giroux is out indefinitely with a concussion, and had two goals in the last meeting between the two clubs, a 3-1 Flyers win.

Giroux's absence hasn't affected his team's now six-game winning streak, however. As the Habs struggled to beat back the Islanders on Tuesday, the Flyers, also without Chris Pronger and Brayden Schenn to concussion-like symptoms, pasted the Capitals 5-1.

Schenn was reported back at practice on Wednesday, and Pronger traveled to Pittsburgh for further evaluation. Yahoo! points out there is a near All-Star team suffering from concussions at present.

In the absence of two of their key players and one of their future stars, the supporting cast has stepped up. Scott Hartnell has six goals over the Broad Street winning streak, and Jaromir Jagr and Danny Briere each have eight points during that span

Despite the lopsided score on Tuesday, Flyers goalie Ilya Bryzgalov had a busy night, making 31 saves.

Blair Betts, the guy the Habs took on waivers from the Flyers and promptly returned, has been placed on LTIR by Philadelphia. It is likely the center is out for the season.

Just as the Canadiens seemed to be getting close to a complete roster, the injuries set back in on them. Travis Moen (foot) joins Brian Gionta as the latest to be in the clinic. In Moen's absence, the Canadiens called up Mike Blunden from Hamilton on Wednesday.

Jacques Martin's defense decisions were made easier today. Rafael Diaz is out due to illness, so Alexei Emelin will be in the lineup. 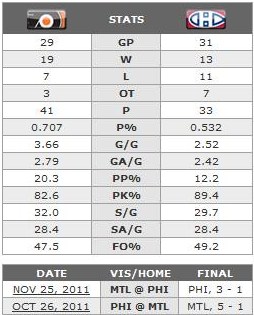