Let's just say it, the Montreal Canadiens like to toy with their fans emotions. The Habs snapped a four-game losing streak at the Bell Centre with a 5-3 win over the New York Islander

Al Montoya was given the start tonight for the Islanders. I personally thought we might see Montreal native Kevin Poulin make his Bell Centre debut. It would not be the case with Evgeni Nabokov taken off IR and put into the backup roll.

Islanders goaltender Montoya, shelled for six goals in a loss to Pittsburgh, did not get off to a great start, taken for a pair of goals in the first period.

But it was the Islanders who struck first, at 7:50 of the first period, after a brutal pass in the defensive slot by P.K. Subban. P.A. Parenteau scooped up the missed pass and fed Matt Moulson, who deked past Carey Price on a cross seam pass, tucking home his 15th goal of the season,

Andrei Kostitsyn responded 1:25 later, after a great individual effort. The Belorussian made a chip in off the boards, then followed it with a smoke an mirrors act, popping out from a screen to beat Montoya.

Mathieu Darche gave the Canadiens their first lead of the night, at 13:28, with a weak slap shot that Montoya completely muffed on.

Montoya woke up between the pipes in the scoreless second period, making 15 saves that he had to work for.

The addition of Tomas Kaberle, given just in his second game with Montreal, has already shown signs of stability on the blue line. It's a breath of fresh air for fans who had to endure the magical mystery tour of Raphael Diaz, et al on the point.

The struggling Habs power play notched it's second tally in as many games when Erik Cole popped his 11th goal of the season just 31 seconds into the third period.

Then the Canadiens began a sloppy sequence that cost them a two-goal lead when Josh Bailey and John Tavares scored in a six-minute span. The first goal was a pair of mistakes by the Canadiens defensive corps. Raphael Diaz, like Subban, made a weak defensive zone clearing attempt in front of his goal. The Islanders regained possession and with Hal Gill caught chasing into the corner, Diaz and Price were handcuffed with two attackers in front of the net.

"We tried to lose it at the end," Price joked. "It was one of those nail-biters that wasn't really necessary. We were scrambling at the end though. We have to stop sitting back, but at the end of the day we found a way to win."

With panic setting in, Petteri Nokelainen would be the surprise hero on the evening. The fourth-liner just came into the play off a line change and one-timed a pass from Lars Eller for the winning goal at 13:45.

An oddball evening continued as Hal Gill did his best Bobby Orr impression. Well the best he'll likely muster The man they call "Skillsy" was merely trying to clear the zone, with Montoya pulled, and flung the puck into the air. The puck landed and rolled down the ice, right into the empty net.

"I was a little embarrassed." said Gill, who was just hoping to avoid an icing call. "I was begging that it wouldn't go down the ice."

The Canadiens even up their home record at 5-5-6 and host the Philadelphia Flyers on Thursday. 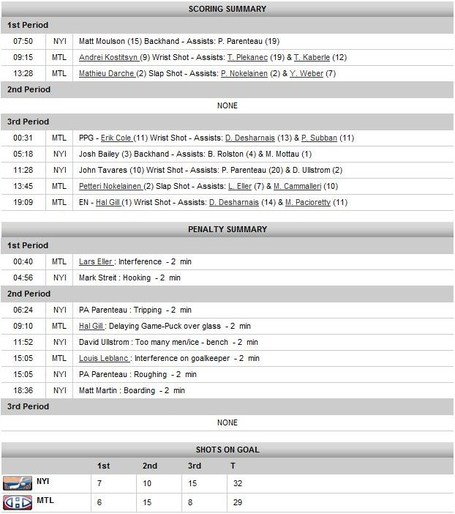 Chris Campoli made his Bell Centre debut, in a Habs uniform, after returning from injury in the first game of the season. "It felt great, awesome. It's better than being on the other side," Campoli said. "I'm humbled to play here and it's a great experience." The rearguard was +1 on the night with 16:34 of ice time.

Lars Eller made some outstanding one-man efforts in the second period, and set up the winning goal. Jaroslav is gone folks, enjoy the future this kid brings to the team.

Alexei Emelin was a healthy scratch, but the Habs made up for his absence with 26 hits. Erik Cole and Josh Gorges led the body assault with six and five hits respectively.

Travis Moen took a puck of the foot, in the first period, and left the game. He is listed as day-to-day.

The long faces on the island at Lighthouse Hockey