The Canadiens kick off a three game home stand, thieir last home games of 2011, with a visit from the New York Islanders.

Safe to say we won't see Peter Budaj in goal. The Habs gave up three consecutive goals to the Islanders during the second period of a 4-3 loss in November.

Matt Moulson had one of those goals for the Islanders, and leads the team in goals with 14. That's just under 20% of the entire team's goal production (62) this season. He has 11 points (8 goals) in his seven games. The Isles have gone 4-1-2 during the stretch.

With injuries to Rick DiPietro (big surprise) and Evgeni Nabokov, the Islanders have looked to Al Montoya between the pipes. A former First Round pick of the New York Rangers in 2004, the goalie with a name that sounds like an F-1 driver had gone 3-1-2, before getting pasted for six Penguins goals on Saturday.

The Canadiens will be hoping to claim at least two of three of these last December home games to close out the year at .500 in the Bell Centre.

Scott Gomez practiced with the team Monday, but is not expected to start. Captain Brian Gionta remains out with a lower body injury.

Chris Campoli returns to the lineup after missing 29 games, and Alexei Emelin is the surprising scratch. 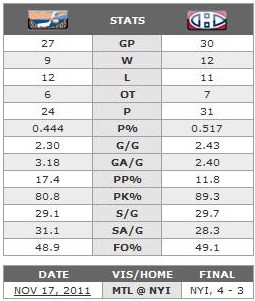