Guessing in the shootout

Share All sharing options for: Guessing in the shootout

With the Habs terrible shootout record there has been tons of talk among our game threads about what Carey Price needs to do to improve the Canadiens chance of winning these glorified coin flips. There has been a consensus in that we believe that Price needs to be more aggressive with his depth and occasionally guess, creating a challenge for shooters who seem to have been able to exploit his predictability. We also have noticed that Price has been susceptible to opponents moving him to his left and placing a quick backhand through his legs while he is in transition.

It seemed like a scouting report had been exposed when the Oilers attempted it numerous times this season. Ryan Jones scored using the move and minutes later was followed by Ryan Smyth with the exact same attempt. When you add in Dustin Penner's winner from the 2011 season it certainly began to look like a strategy by the Oilers.

It is a move that continues to appear against Price with great frequency on breakaway chances and is the exact same move that Zach Parise attempted during his last minute penalty shot on Saturday.

Listening post game to Carey Price he mentioned that

Price implied that he knew the move before it happened because he had seen Parise go backhand before. Price mentioned something similar after the legendary Canada/US shootout from the 2007 World Junior championship. After stopping Peter Mueller to win the shootout, Price mentioned that he had been beaten by Mueller 5-hole during the WHL season and after being beaten easily twice he overplayed the five-hole and guessed right.

Pat Hickey played up the aspect of Price doing his homework, but did Pat Hickey do his?

Price was right in that Parise does have a move where he moves to his right and has been fairly successful going roof over the goalie's lunging glove hand. Here are Parise's shootout attempts in 2012. 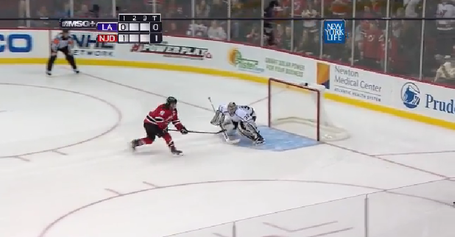 Parise skated in and moved to Quick's left and buries a backhand high glove side. 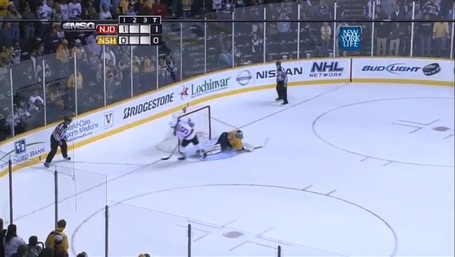 Parise skated in and faked to Rinne's left and cut hard right and slid it past his outstretched pad. 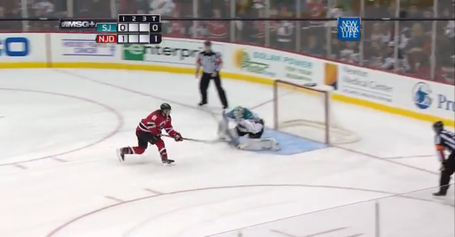 Parise attempts the same move that he used against Jonathan Quick and doesn't get over to the left far enough and Antti Niemi swallows it up for Parise's only miss of the season in the shootout. 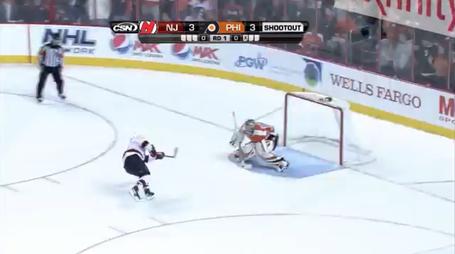 Parise changes it up a bit against Sergei Bobrovsky and fires the puck from the hashmarks beating Bobrovsky high stick side. 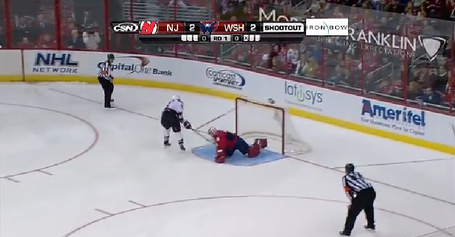 Parise burns Michal Neuvirth with a repeat of the move that had Pekka Rinne flailing like David Aebischer. 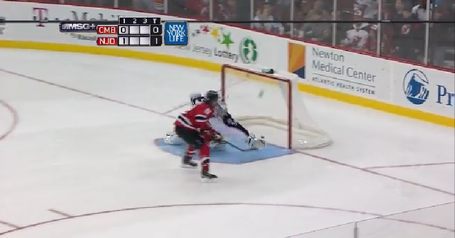 Parise returns to the backhand move that beat Quick and failed against Niemi with strong results. Curtis Sanford who the Canadiens couldn't beat in three attempts was fooled badly as Parise lifts it over his desperation dive. 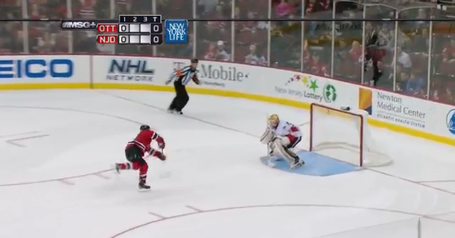 Parise beats Alex Auld. I don't really need to add a description because any of his three moves would have worked, but Parise goes back to firing from the hash marks and beats Auld through the five hole rather easily. This shouldn't count as a goal because it was Alex Auld. 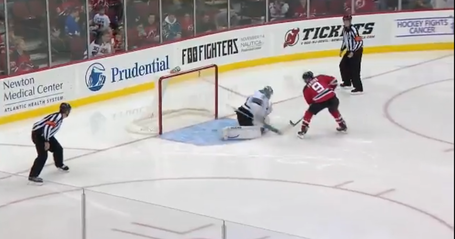 Parise had his first career penalty shot attempt against the Sharks earlier this season. He once again moved the goaltender to the left and used the move that Price has struggled with and slid the puck between Niemi's five-hole for a goal.

Parise had 8 shootout attempts before the Saturday penalty shot.

Initially when Price indicated that he knew what was coming and Hickey said he had done his homework I had assumed that Parise was prone to a pattern. The problem is if he had a pattern he wouldn't have been seven for eight. The reason he has had so much success is because he has four strong moves and they are all set up with the exact same look. 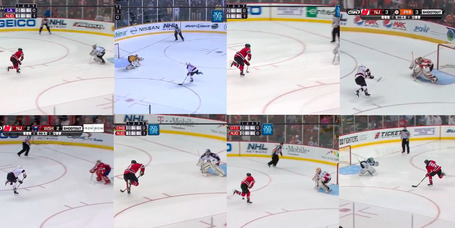 On all eight attempts he fakes a shot from the slot with a leg raise. It comes at almost the exact same location of the ice every time. The only thing that seems to give away that he is going to shoot is his position. On the two instances where he shot and scored he was centered between the hash marks (panel 4 and 7).

If you break down all eight 2012 attempts he broke to the goaltenders left 4 times, to the right 2 times and fired from the slot twice. So Price had a 50/50 chance of being right. He guessed and if Parise had decided to break out the move he beat Rinne and Neuvirth with we would all be talking about how Price is terrible on breakaways, not talking about doing his homework. Maybe when Price added up a 50% tendency for Parise to move to his backhand and the realization that he has been targeted with backhand/five-hole with regularity this season that he did know what was coming.

It was aggressive and paid off huge saving a desperately needed win. Guessing like anything can lead you to being embarrassed badly, but like in the old Nintendo Tecmo Bowl when everybody had only four plays, a correct guess will shut down the play immediately.

Price probably believes that he knew what was coming, but he guessed heads and nailed it. His assumption and guesswork paid off and I wish he would do more of this in the future.