The New Jersey Devils own the NHL's top penalty killing unit, with an efficiency of 94.1 percent. Given the Canadiens recent power play struggles, that is not something to look forward to. They'll be hoping their latest acquisition can quickly remedy that problem.

While the Devils scoring is led by the usual suspects (Ilya Kovalchuk, Patrick Elias, etc.) they've also had some help from rookie Adam Henrique. The Devils 3rd round pick in 2008 has 20 points in 24 games. Four of his six goals have come at home and the freshman is riding a seven-game point streak.

Injury wise, defenseman Andy Greene (toe) is out four weeks, Travis Zajac has a torn Achilles tendon, and Cam Janssen is out with a chest contusion.

Canadiens captain Brian Gionta did not make the trip to East Rutherford, so coach Jacques Martin made some line adjustments at Friday's practice. It should be entertaining to see Louis Leblanc getting some third line work with Lars Eller.

Newly acquired rearguard Tomas Kaberle is expected to be in the lineup this afternoon. In the event he can't, Chris Campoli has been given the green light to play and should be available. 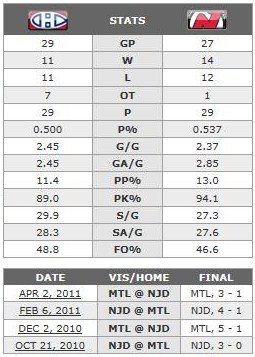 Devilish thoughts at In Lou We Trust