After an abnormally brutal game against one of the worst teams in the NHL to end a miserably inconsistent November, the Habs are right back at it tonight against one of the league's elite teams since the lockout in the San Jose Sharks.

The Sharks have played the fewest games of any team in the NHL so far with the Rangers playing earlier tonight, but are a solid 13-7-1. Their +12 goal differential is the 3rd best in the tough Western Conference. Make no mistake, the Habs are in for a contest tonight.

While Montreal and San Jose are both very strong possession teams, the Canadiens have been fading quickly in that area since a loss to the Bruins in which they dominated possession the entire game but couldn't buy a goal.

Injuries may also be taking a cumulative toll with Scott Gomez, Andrei Markov, Chris Campoli, Jaroslav Spacek, Ryan White and Andreas Engqvist sidelined. Mike Cammalleri is also assumed to be struggling with a nagging injury or two but still playing. Add to this the suspension to Max Pacioretty and the lineup is very depleted with close to $20M of the team's overall salary sitting on the sidelines.

After Peter Budaj was solid against the Anaheim Ducks, Carey Price gets a chance to right the ship tonight. Price won the Molson Cup for November as the team's most valuable player as chosen by the fans through three star selections.

While there were rumours that Markov could return to action on this California swing, it seems something has gone wrong recently as he didn't accompany the team to San Jose, instead meeting with doctors in Los Angeles. CTV's Brian Wilde relays a report from Martin McGuire that Markov can not pivot on one side and won't be practicing this week.

The news is just another kick to the groin for Habs fans looking for a little bit of optimism in this crazy season.

The two teams have alternated wins on home ice the last few years, hopefully the Habs can buck that trend tonight. 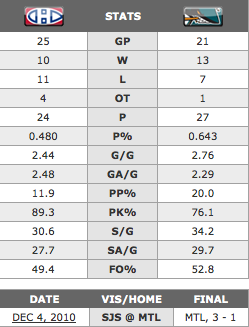 Read coverage from the other side at Fear The Fin