The Montreal Canadiens are now at .500 hockey, after a 2-1 win over the Ottawa Senators. Everyone is back on the bandwagon.

After a 1-5-2 start, the Habs have now strung up a streak of four wins, with the last three coming against divisional rivals.

One of Habs coach Jacques Martin's biggest concerns, heading into Friday's game, was shutting down the league's top power play. His penalty killers did just that, keeping the Senators off the board on all four chances.

"They worked hard, " Martin said. "They had great net presence and moved the puck around very well."

To top things off, the team's best penalty killer started off November in the same way he closed out October. 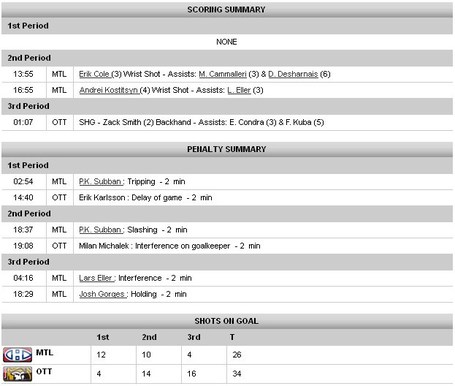 The game was scoreless through the first 20 minutes, with the Habs out-shooting the Sens 12-4. Ottawa goalie Craig Anderson had to be on his toes in the period, but you could see the Canadiens were still getting the cobwebs out after five days off.

Both Canadiens goals came in the second period. Erik Cole was first to the back of the net at 13:55, taking the cross-crease pass from Mike Cammalleri. Three minutes later, Lars Eller capitalized on a Senators turnover and made a charge to the net, drawing in Anderson. He then made a quick backhand pass to Andrei Kostitsyn, for his fourth goal of the season.

Carey Price's bid for his first shutout of the season ended at 1:07 of the third period. With the Habs on the power play, Erik Condra was able to work the puck up the boards, and feed Zack Smith. The Sens penalty killer then shoved the puck under a small space under Price's arm. The Senators PK unit was 27th coming into the game and stopped the Canadiens on both of their opportunities.

The Senators were the stronger of the two teams in the latter part of the game, out-shooting the Canadiens 13-4 in the final 20 minutes.

The Canadiens get right back at it Saturday with a visit to the New York Rangers.

"It won't be any easier," Martin said on their next opponent. "They've won two games in a row and they've got strong goaltending. It's going to be a battle."

Carey Price is clearly back in form, making 33 saves on the night. His best on the night was on a Senators powerplay where he robbed Milan Michalek.

Both Canadiens goals came from strong genuine teamwork. Cole cited David Desharnais' work in front of the net that led to his goal and Travis Moen's forechecking resulted in what would be the winning goal.