The Canadiens open their tour of California with a visit to former captain Saku Koivu and the Anaheim Ducks.

To say the home team for the evening has been struggling might be an understatement. The Ducks are 0-6-1 in their last seven and have tanked in 16 of their last 18.

Five-on-five has been a disaster for Anaheim, with a 29th ranked 0.64 F/A. Like the Canadiens, they have also allowed four shorthanded goals against, which adds to their -13 overall rating (29th).

What they do have going for them is their 8th ranked penalty kill (third in the Western Conference).

The "old man" Teemu Selanne leads the team in scoring with 22 points, and you have to think that Corey Perry and Ryan Getzlaf will start picking it up soon.

They may be looking for this match-up as a chance to rebound, as they have gone 4-0-1 in their last five meetings against the Habs.

Reports speculated that Andrei Markov could return to the lineup tonight, which were shot down by Jacques Martin. Markov didn't skate at the pre-game practice and the coach says he's taking a therapy day. What that means is up for speculation, but most likely it means he's just not ready, or could play tomorrow and wants to rest for a day prior. As always though, speculation abounds of another setback with his knee.

With Max Pacioretty serving his three game suspension, Andrei Kostitsyn will move up to play on the wing with Tomas Plekanec and Brian Gionta

Louis Leblanc will make his NHL debut, and will likely see action on the third line as Aaron Palushaj is a surprising healthy scratch in favor of Yannick Weber, who will play on the 4th line. 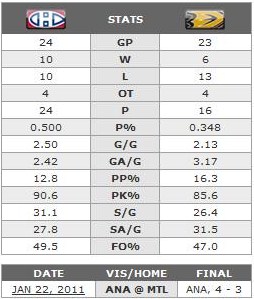 Quacks from the Ducks at Anaheim Calling and Battle of California.