Game Thread: Guess Who's Back

Share All sharing options for: Game Thread: Guess Who's Back

It is unbelievable when you realize it, but Sidney Crosby hasn't played at the Bell Centre since game six of the second round in the 2010 playoffs. He makes his return tonight after a concussion held him out of action for the better part of a year.

Crosby has blown all expectations of a slow return out of the water with 2 goals and 5 assists in 3 games. Pittsburgh already sits atop the NHL standings and has all of Crosby, Evgeni Malkin and Jordan Staal for the first time in forever. This is a scary, well coached team, probably cup favourites.

Andrei Kostitsyn is expected to return to the lineup tonight, and hopefully that added depth can re-invigorate a Habs team that has looked slow the last two games.

Although both teams played yesterday, both are expected to play their starting goaltenders tonight.

Scott Gomez is still day-to-day with a groin injury. Jaroslav Spacek is day-to-day with an undisclosed lower body injury. Andrei Markov is getting closer, and there are rumours that he could play as soon as next week. Chris Campoli is skating but his return is uncertain, perhaps in the new year. Ryan White is not skating yet as he continues to recover from sports hernia surgery. Andreas Engqvist is out with an undisclosed injury.

If Kostitsyn is a go, expect Frederic St- Denis to be the healthy scratch tonight.

Without Malkin, Crosby and Letang the Penguins made the Canadiens look terrible in the only previous meeting this season. A strong forecheck and unrelenting physical play combined with positional perfection, it was a hallmark game for Dan Bylsma. The Habs look to avenge that loss and get back over .500 tonight. 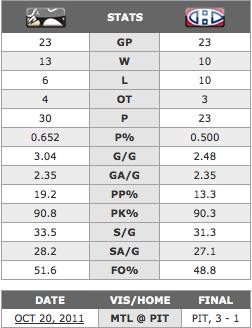 The Penguins side of things over at PensBurgh