Share All sharing options for: Game Thread: Habs pay a Black Friday Visit to the Flyers

So who is home to watch this 3pm tilt? Not me!

For those who are, or can sneak a live feed on their work computer, enjoy!

The Habs are coming off a weird one against the Carolina Hurricanes that saw them bounce back from 2-0 and 3-2 deficits.

Claude Giroux is off to a fantastic season with the Flyers. The native of Hearst, ON has 27 points (11 goals) in his first 22 games. His official website is maintained in part by our own Francis Bouchard, who also resides in Hearst.

Ilya Bryzgalov was on the hook in the Flyers 5-1 loss to the Canadiens on Oct 26. He was pulled after surrendering three goals on six first period shots in their 4-3 OT win to the New York Islanders, Wednesday night.

After a quick start to his season, Jaromir Jagr has just two points in his last five games for the Flyers. He left Wednesday's game, with a lower-body injury, and is not expected back until December 2.

Defenseman Chris Pronger is listed as day-to-day with a virus.

Scott Gomez is listed as day-to-day for the Canadiens with a lower-body injury (groin?). With no one ready to come back from injury among the forward group, and the Bulldogs already picked clean, the Habs are forced to play Frederic St- Denis as a forward.

Habs coach Jacques Martin confirmed Thursday that Carey Price will be between the pipes for the Canadiens.

Strike early Habs!: The Flyers have given up eight first-period goals in their last three games 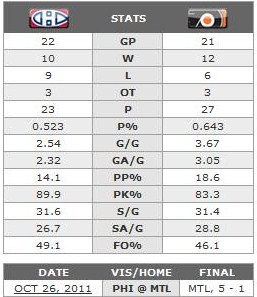