Share All sharing options for: Game 22 Recap: An ugly one, but the Habs get the win!

In terms of game quality, it certainly won't be one for the history books. Several miscues by both squads, shoddy officiating an poor ice conditions led to a rather sloppy evening. But as an old friend once said, "Two points is two points, is two points."

The Hurricanes struck early, 34 seconds in to be exact. After Mike Cammalleri's failed to clear the puck out of the defensive end, with a weak sand wedge attempt, the Canes regained possession. The puck worked across the ice to Jiri Tlusty, who flung a wrist shot at the Canadiens' net. The puck deflected off of Alexei Emelin,  then off the pad of Price and off the post. It then trickled along the goal line, but Price got jumpy and managed to knock the puck into the net.

An unusual play led to the home team's second goal of the night, after the puck landed on the top of the Canadiens net. Brett Sutter managed to fetch it loose, evading a high stick by a hairline, getting it to Tim Brent. Brent then whipped the biscuit out to Anthony Stewart, left uncovered by Cammalleri, who slapped it past Price at the six-minute mark.

The Canadiens seemed to struggle on the RBC Centre ice as the puck just didn't want to go their way. Likewise the Habs power play was similar to Monday night, they were unable to capitalize on a four-minute minor to the Hurricanes Tuomo Ruutu.

The visitors did get some support from their other special teams unit, however. Playing shorthanded the Canadiens got some chances in the offensive zone. After Cam Ward couldn't handle a Raphael Diaz shot, Lars Eller battled for the loose puck to get his team within one at 9:06 of the second period.

In the third period, the Habs struck early with Cammalleri tipping in a Josh Gorges point shot 27 seconds in to tie the game a a pair each.

The Canes struck back at 3:18 when Brandon Sutter overpowered David Desharnais and drove to the net, dumping a Patrick Dwyer pass five-hole on Price.

But wait, the scoring wasn't over yet. Seventy-nine seconds later, Travis Moen's stick was in the right place in the right time, redirecting a Yannick Weber shot for his seventh goal of the season. It was Moen's 50th career goal and 100th career point in the NHL.

An exciting overtime period saw opportunities for both teams to get that added point, but both goaltenders were on the ball.

The Canadiens are 5-2 in their last seven road games, with six of those decided by one goal.

They head off now to Philadelphia to meet the Flyers Friday at, wait for it, 3pm. 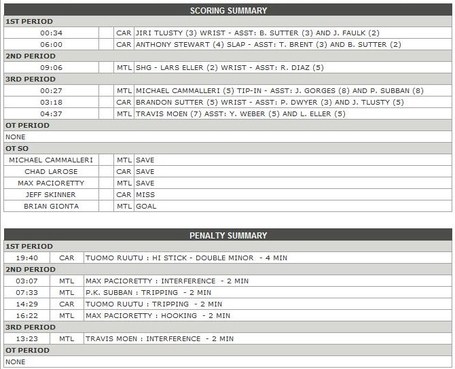 You know someone has played his best game of the season when both broadcasters come to that conclusion. Lars Eller only played 12:54, but played every second of every shift and finished with a pair of points.

Scott Gomez did not return to the Canadiens bench after the second intermission. The team has listed him as day-to-day with a lower-body injury. Dave Stubbs is saying groin.

The Canadiens had 20 missed shots and the Hurricanes 10 (one in OT). I'd think one in every five hit the post.

After a shaky start to the game, Carey Price came to life when needed and gave his team the opportunity to get the win.

Montreal was 0 for 3 on the power play, playing 5:20 with the man advantage.

Fire the ice crew at the RBC Center!

Oh great, the Bruins streak is at 10. Benoit Pouliot with the SO winner. Meanwhile the Bruins fan beat up at the Bell Centre Monday speaks out. "I'm pissed off," he said. "Because I'm 5 foot 4, 150 pounds, and the first guy that grabbed onto me was 6 foot some, 200 pounds." Sorry, I couldn't let that go.