After being blanked last week in back-to-back games,by the Canadiens and the Buffalo Sabres, the Carolina Hurricanes dug out of their rut with wins against the Toronto Maple Leafs and the Philadelphia Flyers.

Canes coach Paul Maurice felt the team hit rock bottom in their game against the Habs, and sees the team turning in a positive direction. We'll see how big of a turn it is tonight.

One thing Maurice did was abandon the experiment of playing Eric Staal on the wing. The Hurricanes captain picked up a pair of assists against the Leafs on Sunday, his only points in his last four games. On the plus side, he did shave 3 points off his appalling plus/minus, since his last meeting with the Habs, and now sits at minus-15.

Jeff Skinner leads the Canes in scoring, with 21 points, and was a huge factor in their last two victories.

Ward stopped 53 of 57 shots, in the Canes' last two wins, and will be looking to atone for his shaky outing against Montreal last week.

There are no expected changes on the Canadiens forward lines, and Hal Gill returns to the defense corps. Gill was paired up with Yannick Weber during Tuesday's practice. Frederic St. Denis, who has impressed since his call up from the Hamilton Bulldogs, will be the odd man out.

The Canadiens also got some more good news Tuesday, when Andrei Markov was cleared for contact. It won't be until December though, when Markov is expected to return to action.

Carey Price, who blanked the Hurricanes last week, gets the call in goal. 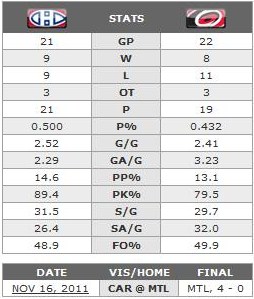