Share All sharing options for: Game Thread: Habs vs Bruins Round Three

The Bruins Stanley Cup hangover appears to be over. After starting the season 3-7-0, the defending champs have gone on an eight-game winning streak.

The Canadiens swept a home-and-home series against the Bruins back in October. Tim Thomas was on the hook for the 2-1 loss in Boston, but has gone 5-0 with two shutouts since. In those five starts, the Bruins have outscored their opponents 28-8.

Boston's current win streak has seen free agent signing Joe Corvo begin to fit into the team much better than earlier in the year, while their lines have someone settled in after the off-season retirement of Mark Recchi and Michael Ryder leaving for Dallas.

Tonight also marks Benoit Pouliot's first game back at the Bell Centre as he was out with an illness the last time Boston visited Montreal. Look for twitter to count how many times Benny trips over the blueline.

As far as the Habs go, the team is riding a fairly hot streak of 12 games where they are 8-3-1, and 4-1-1 in the last 6. Plekanec and Cole have been hot as of late. Plekanec is riding a streak of three straight 2 point games, and has 3 points in the two previous games against Boston this year. Cole is on a 5 game point streak with 3 goals and 4 assists.

No injured players are ready to return as of yet, but Francois Gagnon speculated on twitter that Andrei Kostitsyn could be back as soon as Saturday. Hal Gill and Jaroslav Spacek are still listed as day-to-day, though Gill said he should be ready to go Wednesday against Carolina.

Andrei Markov is looking at a return in December, while Ryan White and Chris Campoli are out long term still. Campoli however is skating. Andreas Engqvist is still out with an undisclosed injury. 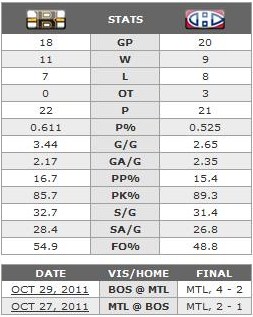