Game 20: Reflections on the Habs 4-0 win over Rangers

Share All sharing options for: Game 20: Reflections on the Habs 4-0 win over Rangers

So you're team has won seven straight, you've sat since Tuesday, and don't play again until the following Wednesday. So why in the world do you start your backup goalie against the Canadiens last night?

New York Rangers coach John Tortorella played off the French-Canadian goalie strategy, merely citing that it was Martin Biron's time. Biron hadn't played since he recorded a 3-0 shutout against the Winnipeg Jets on Nov 6. If Torts meant it was his time to snap the winning streak, he was right.

Biron, despite being shorthanded, appeared far too deep in his crease on what would be the winning goal by Erik Cole, and was likewise, and half asleep, on the Canadiens second goal from Brian Gionta.

"Sometimes you make it more complicated than it needs to be and give them room that they shouldn’t have otherwise, and that kind of summed up that goal and that summed the whole game." - Martin Brion after the Canadiens took a 2-0 lead.

In his post-game interview (after the jump), a shockingly relaxed, perhaps sedated Tortorella noted the speed advantage of the Canadiens was the difference maker in the game, and would not point an individual players, including Biron.

Biron appeared to save his best for Scott Gomez, coming up with some big saves on the Habs center. It was Biron who coughed up Gomez's last goal back in February. The fans certainly haven't forgot that, as several boos rang out each time he touched the puck. Maybe it was the groups of Rangers fans in the nosebleeds, I don't know.

Special teams were the key for the Canadiens, on top of their speed. Even with a green group of rearguards the Habs penalty kill was strong in killing off three Ranger power plays and have stopped the opposition in their last 28 chances.

The power play converted on two of their chances and it was pointed out by NHL.com's Arpon Basu that it sits at 9 for 46 since the dismissal of assistant coach Perry Pearn. The team has gone 8-3-1 in that period. Erik Cole had a goal and an assist with the man advantage, and has 3 power play goals on the season now..

In light of no goal production, Gomez played a  solid game with 2 assists, 2 SOG and a pair each that missed the net or were blocked. Gomez was more than deserving of a Three Star selection, and probably would have got it if not for the fact the fans make the choices.

Carey Price recorded his first career back-to-back shutouts and, if it was even possible, had an easier first two periods Saturday, than he did against Carolina. Of the Rangers first 10 shots on goal, there were maybe three or four that Price really had to make an effort for. The stop on Marian Gaborik was his biggest, early on in the game.

Mike Boone, in his "About Last Night" notes how Josh Gorges feels Price is like a third defenseman on the penalty kill, and capable of killing the clock by clearing it up the boards. This was something Price felt he needed work on during preseason. It's likely that he's mastered the new glass at the Bell Centre.

Saturday's game was supposed to be a test for the Canadiens green defense corps against a hot team. They passed the test, in part to a sterile offense. Another real test comes Monday when they host the Boston Bruins, who are riding an eight-game winning streak. The B's dismantled the Islanders 6-0 on Saturday.

Post-game Habs coach Jacques Martin stated that neither Hal Gill or Jaroslav Spacek will be ready for Monday.

Game photo of the night:  HNIC's Cassie Campbell, obviously in heels, interviewing Brian Gionta. Campbell later tweeted, "Gionta told me prior to interview that he should have worn his skates! We laughed as I did have high heels on! I am about 2in taller tho!" 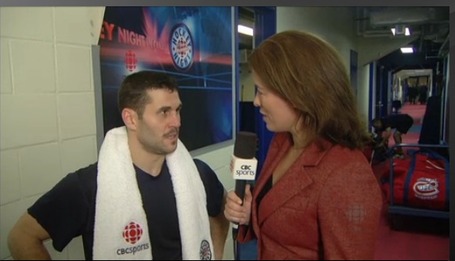 More links and vids after the jump

Prior to the game, a tribute and moment of silence was given to former Habs trainer Eddy Palchak, who passed away Wednesday.

HabsTV with Scott Gomez post-game. Listen to his remark to Evelyn Audet's quetion on how they beat the Rangers and not the Isles.

Funny how Rangers fans thought we were upset over the officiating in the last meeting between these two teams, and brushed it off. Looking at the game recap from Blueshirt Banter, I couldn't help but notice this:

"As I stated before, the officiating was just horrendous tonight in Montreal. Late in the second period, Michael Del Zotto was called for diving, after being tripped up by Frederic St-Denis. When going at top speed into the zone, and you catch a stick in the legs, you will fall and it will twist you around. To call diving on that play was just a miss-call.

Again in the third period, another questionable hooking call on Ryan Callahan, and the Canadiens went back to the power play. Nearing the end of the power play Tomas Plekanec let a slap shot go from far out, that beat Biron low to the blocker side, 3-0 Montreal.

If it wasn't bad enough, Andre Deveaux was whistled down for boarding after a solid check on Aaron Palushaj. Deveaux also received an extra two minutes for roughing, which I'm not even sure where that came from. Just three minutes later, Brandon Prust was called for roughing, after driving the net after Carey Price covered the puck. Still confused at how it was actually a penalty, but what can you do."