Share All sharing options for: Game Thread: Habs hope for a better disciplined night vs Rangers

The Canadiens will be hoping to avoid the penalty box this time around, as the host the New York Rangers. The Habs ran a string of minor penalties in their 5-3 loss to the Rangers at MSG, albeit the officiating was rather laxed.

Since that game, the Canadiens PK has been perfect in 25 times short handed.

The Rangers will be looking to extend their winning streak to eight games, and are 8-1-1 in their last ten.

Carey Price gets the start for Montreal and is 3-0-1 with a 1.72 GAA against the Rangers at the Bell Centre. Martin Biron will be between the pipes for the Blueshirts.

On the EOTP side of things, Andrew Berkshire is a healthy scratch in the commentary. He is hanging out with the HIO Summiteers tonight.

Update via HIO's Dave Stubbs: That's not a notebook that Jacques Martin is writing in. According to Stubbs,"it's a two-sided, fold-in-three pre-printed cardboard card on which he charts plays, lineups, etc."

The pre-game will honour the late Eddy Palchak. 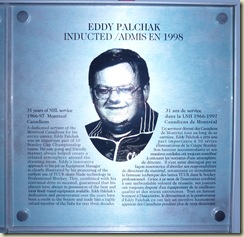 Chris Boucher breaks down the Habs at ES.

When Habs media need a filler, the look to Georges Laraque. It appears that Mark Recchi is now the Boston Bruins go to man for Boston Radio. Kevin Bieksa responded to Dr. Recchi's latest remarks on the Vancouver Canucks, "Isn't he retired? Tell him to play a round of golf or take a nap. What's he chirping us for?" 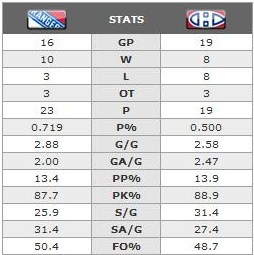