Who could have predicted that? With a virtually depleted defensive corps, the Montreal Canadiens did the improbable a 4-0 win over the Carolina Hurricanes. OK Great Big Sea's Allan Dole tweeted a 5-1 Habs win, but c'mon!

With a group of rearguards who have barely half the career game experience of Hal Gill combined, and three who never saw NHL action prior to this season, one would have expected a busier night for Carey Price.

It would not be the case as the Hurricanes played possibly the worst game imaginable, losing puck battles they should have won and making horrendous offensive decisions. The Canadiens made them pay for it with a 36 shot barrage at Cam Ward, who didn't help his case with a lackluster night of his own.

The emotional level was noted in the second intermission, when TSN reported a broken goalie stick flew out of the visiting dressing room. It didn't rally the team though.

Hey, look who's in 8th place in the Eastern Conference! 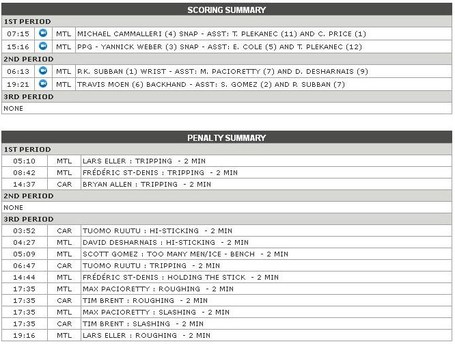 The steamroll began 7:15 into the first period. As the Habs finished killing a Hurricanes penalty, Price cleared the puck up ice to Tomas Plekanec. The Habs center dished it off to Mike Cammalleri, who slapped it (with emphasis) past Ward.

The Canadiens power-play then kicked in, eight minutes later, when Yannick Weber one-timed an Erik Cole pass for his third goal of the season.

Montreal dominated the first 20 minutes with a 16-4 shot advantage. It would carry on into the second frame, with a shot tally of 16-8 as any attempt by the Hurricanes to start up anything simply fell apart.

After going 51 shots without a goal this season, P.K. Subban finally found the back of the net at 6:13 of the second. The sophomore rearguard wristed in a Max Pacioretty pass right in front of  and unprepared Ward.

Travis Moen continues to be a Habs sniper. After a Subban slap shot from center ice practically froze the Carolina defense, Moen's centering pass from the corner bounced off of Ward and rolled into the goal with 49 seconds left in the period. It was the plumber's sixth goal of the 2011-12 campaign, matching his total from all of last season.

Carolina showed something of a spark, mounting a 10-3 shot advantage in the third period but in all honesty this was an utterly brutal performance by the visiting team. With a game Thursday in Long Island, the Canadiens were able to conserve their strength for their tilt with the Islanders.

Carey Price picked up his first whitewash of the season, to go with an assist, in a game where he may not have even broke a sweat until the third period.

The two teams meet again next week in Raleigh. You have to think a different Carolina team will show up there.

I liked what I saw from Scott Gomez tonight, and I thought he might join Subban in breaking the goal drought. He was amongst the team leaders in shots and picked up an assist on the Travis Moen goal. Maybe not the best to gauge by, given what the opposition fielded tonight.

Frederic St. Denis played an impressive game in his NHL debut, and was rewarded with extra ice time in the third period.

More good news for the Canadiens came pre-game, when the team announced that they signed prospect Brendan Gallagher to an entry level contract. The deal kicks in next season.