Share All sharing options for: Game 17 Recap: Habs Cough It Up To Sabres 3-2 (SO)

The last time Jhonas Enroth faced the Montreal Canadiens, his Buffalo Sabres battled back from a two-goal deficit to win 3-2 in an elongated shootout.

Tonight would be no different, just that it took three rounds instead of six or seven. Thomas Vanek and Brad Boyes both cashed in on their shootout chances against Carey Price, while Max Pacioretty was the sole successful shooter for Montreal. Price is 0 for 4 in shootout goals this season and slammed his stick on the boards as he left the ice.

The Canadiens salvage the single point, but much like their loss earlier this season, were the more dominant team. Well, they were for the first 35 minutes anyway, and I think we've heard that story one too many times in the last season or three.

"We just sat back far too much," said a dejected Erik Cole post game. "We took too many penalties and lost our rhythm. You try to play the same way you've been playing and not sit back and give other options to the opposing team."

Against some teams, sitting back on a lead may might work, but when Lindy Ruff is coaching on the other bench it's is not a way to win a game. You'd think by now Jacques Martin would have figured that out. 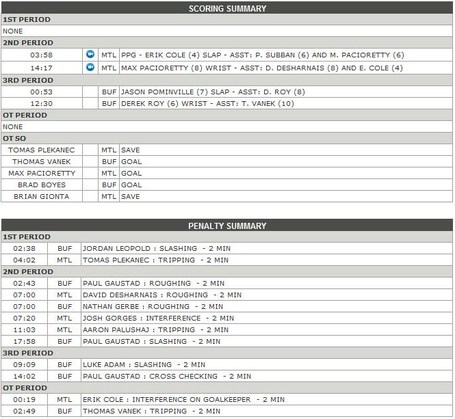 After a relatively dull first period that saw the shots just 10-6 in favour of the Canadiens, things picked up in the second frame.

The Canadiens power play finally clicked in after what has seemed like an eternity at 3:58 of the period. After a series of won puck battles by Pacioretty, the biscuit eventually found the stick of P.K. Subban. With a heap of players, including the Sabres' Enroth in front of him, the sophomore opted to dish off to Cole, who fired the puck into the back of the net.

The Canadiens other special teams unit then came to life, fighting off a 4-on-3 and later 5-on-4 situation. The combination of Price's puck handling and the aggressive work of Raphael Diaz and Alexei Emelin killed Buffalo's best chances for a scoring opportunity.

The Habs then took a two goal lead when Pacioretty managed to shovel a softie past Enroth at 14:17.

The Sabres had done little, in terms of puck possession, in the first 40 minutes of play. They finally put something together, 53 seconds into the third period, when captain Jason Pominville slapped a shot past Price.

They continued to press through the period, denying the Canadiens a shot on goal for nearly 15 minutes going back to the second period. At the 2:30 mark, the Sabres tied it up, amidst a Montreal defensive breakdown and a delayed penalty, when Derek Roy grabbed a loose puck to wrist in his 6th goal of the season.

The game carried into an extra five minutes, with both teams getting power-play opportunities and coming out unsuccessful.

The Canadiens now sit a 7-7-3 and will host the Carolina Hurricanes on Wednesday.

Jaroslav Spacek and Andreas Engqvist both left the game with undisclosed injuries, and are listed as day-to-day. Martin did hint that a call-up would be made and that Spacek would likely not be ready for Wednesday. The absence of Spacek taxed the minutes of his fellow defensemen as three of them played over 24 minutes.

Erik Cole was the dominant player, on both sides of the ice in the first period, He had three shots on goal and finished with five on the night. He was not chosen as a shooter by the Habs coach.

The Habs fourth line had a few moments of offensive opportunity, noted by Mathieu Darche's missed breakaway opportunity. But with a game tied at two, why are they out late in the game?

Scott Gomez did not score a point, and will surely feel the wrath on the armchair coaches, but No. 11 was hustling on every shift as part of the third line. He was on for the Habs power-play in the OT and had a great chance to win it.

Winning reaction from Die By The Blade