Where Do We Stand?

Share All sharing options for: Where Do We Stand?

About a year ago, I was like most fans when it came to advanced hockey statistics: On the outside looking in. As a result, over the last year, I have spent a fair amount of time immersing myself in this burgeoning area of analysis. In the process, I have been exposed to advanced stats through various sources and have begun to appreciate that, when analyzed in proper context, they are a tool helpful to the development of a deeper understanding of the game. I believe most fans want to understand hockey at a deeper level, and becoming familiar with these stats is an important step in that direction. What I want to do right now is give a primer of sorts and then break down the first portion of the season (as of November 10th).

We'll start simple. "Shots" on net are undeniably important in hockey. The more shots you get on net, usually the more likely you are to be successful. This is due to two different things: 1) Shot volume over time produces more goals, and 2) if you're shooting more, that means you have the puck more than the other team. When you have the puck, the other team isn't scoring. For the purposes of this breakdown, the number under the shots heading is the percentage of total shots fired while that team is playing at even strength while the score is tied that were fired by the team in question, multiplied by 1000 to avoid decimals. For example, Team A registers 165 shots, while surrendering 122 shots within these parameters. They will have recorded .575 of all the shots, 57.5% or for the purposes of this breakdown, a rating of 575. The reason I'm using these parameters are pretty simple, when a team has a lead, they tend to play more passive and protect it. Within the stats community it is called score effects. It's why you often see a team get massively outshot when they blow out another team. Those situations are relatively meaningless in analyzing how good a team is. If you're up 5-1, you don't care about getting shots on the other team's net anymore. Similarly, special teams don't tell us much here. On a powerplay any team can outshoot the opponent.

Creating a bigger picture of possession we move on to Fenwick. Fenwick is a measure of the same things as shots for/against, only it also includes shots that miss the net. So what you end up getting with Fenwick is a measure of how well a team gets its shots through the other team and towards the net. The extra data gives us a better measure of puck possession because it is a larger sample size. I'll be expressing Fenwick in the same way as shots.

The final measure of puck possession we're using is Corsi, which also includes shots that were blocked. Increasing the sample amount of data once more gives us a larger sample size and therefore a more stable metric. Corsi will be expressed the same was as shots and Fenwick. Personally I like Fenwick as a measure of offensive success more than Corsi because you're putting shots through the opposing team. Corsi is a better measure of puck possession, Fenwick, to me, shows how successful that team is at translating puck possession into opportunities. While these statistics measure puck possession they don't guarantee success over a short period of time. This is where random variation comes in. Teams and players get hot and cold, puck luck comes and goes.

This brings us to PDO (PDO is not an initialism, it is simply the username of the person who created the metric on a message board), which I'll be using PDO to express a team's luck in both scoring and preventing goals against. PDO is a combination of a team's shooting percentage and a team goaltender's save percentage. Expressed the same way I have expressed the other statistics we are using here, PDO is expected to stay close to 1000, for good teams and bad ones. Follow me after the jump to see why this happens and where the Habs stand.

The first question among people who are new to PDO ask is always "But why would a team automatically have a PDO of 1000? What if one team has better shooters than another team? Or a better goalie?" That happens, but the end result always ends up close to 1000. This is largely because the more shooters and goalies play, the more consistent their shooting and saving percentages are, especially at even strength. The more minutes a player plays, the more their PDO regresses to the mean of 1000, the same goes for teams. The significance of this is simply high shooting percentage is not sustainable in the NHL. It isn't good or bad to have a PDO above or below 1000, it is just an expression of luck. However being far above 1000 means a team is likely to regress negatively, while being far below means a team is likely to regress positively.

At the individual level, Cam Charron charted every player in the NHL last season to illustrate this trend. The x-axis on the graph is the number of minutes played, and the y-axis is the player's PDO. 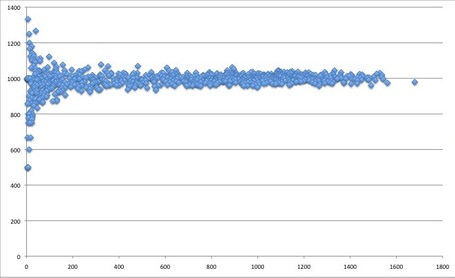 As you can see, the variance in PDO becomes much smaller the more time goes by. Contrary to what many believe, higher shot totals are a better indicator of talent than high shooting percentages. Alex Ovechkin scored 65 goals 2007-08 with a 14.57% shooting percentage, which is higher than average, but not by much. It's certainly more sustainable than David Desharnais' 27.27% of this season. David Desharnais isn't a "Better shooter" than Ovechkin, nor does he "Pick his shots", he's just been lucky in scoring a few goals while not generating many shots. Ovechkin on the other hand is an elite player who's constantly generating offense. Even if he has a very unlucky year, like last year, he's still an excellent player because he's always generating offense.

A high PDO score means that a team is either getting unsustainably high shooting or save percentage over a given time. A low one means that team is getting the opposite. Neither high or low PDOs last very long. Puck possession however, is sustainable. Good teams like the Red Wings have proven this time and time again. Teams that dominate puck possession win games more often than they lose. As luck evens out, which it inevitably does, puck possession becomes the determining factor in wins and losses.

Now let's look at all 30 NHL teams and see where Montreal fits:

All statistics for this breakdown were taken from www.timeonice.com

All statistics are within the parameters of even strength play while the score is tied.