Game 16 Recap: Pacioretty's OT Winner Gets Habs Back To .500

Share All sharing options for: Game 16 Recap: Pacioretty's OT Winner Gets Habs Back To .500

The Montreal Canadiens would have settled for the single point. Instead an overtime goal from Max Pacioretty gave the Canadiens a 2-1 win over the Nashville Predators.

It wasn't the best, or easiest of games for the Canadiens as they struggled against a Predators team not known for it's puck possession abilities. Nashville may have benefited when they made a call to Milwaukee Admiral's coach Kirk Muller, who knows a thing or two about the Canadiens and Jacques Martin's system.

Montreal hit the score board first at 13:49 of the first period. The Habs center took a shovel pass from Erik Cole and worked the puck past Predators netminder Pekka Rinne for his third goal of the season.

The Predators replied, at 3:20 of the second period, with what is being too uncomfortably common for Habs fans. Shorthanded, and with the puck in the Canadiens end, the Predators won the draw, with Brian Gionta taking it. Shea Weber managed to find some space swept in and blasted a shot past Peter Budaj. It's the fourth short-handed goal against by the Canadiens this season.

While the Habs power play continues to struggle in both scoring and keeping the puck out of their own net, the penalty killers are quickly becoming a dominant unit. The most notable was a 47 second 5-on-3, in the first period.

Pacioretty's winner came after P.K. Subban patiently worked the puck up the boards, and back towards the crease before surprising Rinne with a pass to his forward. Pacioretty roofed it from the face-off dot, short side under the cross bar, to get his team the extra point. A closer look shows that Pacioretty

Budaj picked up his first win in a Canadiens uniform, doing exactly what is needed in a backup, and had to look sharp in several key moments during his 25 save performance.

The win puts the Canadiens back at .500 hockey. They return home to face the Buffalo Sabres, who were crushed by the Boston Bruins tonight, on Monday. 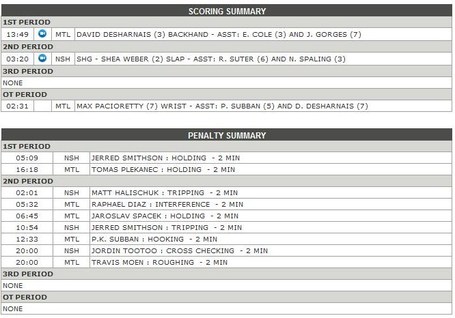 P.K. Subban set up the winner and was +2 on the night. The sophomore rearguard is +5 in 5-on-5 situations this season. A bit of panic set in when Subban ran into Jordin Tootoo, late in the second period, and did not return to the bench until five minutes of the third period had expired. Marc Antoine Godin tweeted post-game that Subban has been dealing with a shoulder problem for a couple weeks and can play through it.

Scott Gomez was back for the first time in eight games. He played just over 12 minutes, primarily on the fourth line, but made a great back check late in the third period. Considering he's not 100% there's really nothing an honest observer could complain about.

Mike Cammalleri and Erik Cole both had some great chances to get their team ahead in the game. Cammalleri was robbed by Rinne in the second period, on a shot he likely wishes he raised a dozen inches higher. Rinne showed why he has a $49-million extension when he stretched across to stop Cole as the seconds were winding down.

Hal Gill was a key factor on the Canadiens penalty killing unit, and is the undisputed king of flexibility by a 6'7" man in the age 35 and over category.

Josh Gorges picked up an assist on the opening goal, and now has eight points on the season.

Discipline won the game in the third period, when the Canadiens avoided the penalty box.

Smashville's take on the game at On the Forecheck