Share All sharing options for: The season begins as Habs visit Leafs

The Montreal Canadiens kick off their 2011-12 campaign, on the road for the 11th straight year by paying a visit to the Toronto Maple Leafs.

I have to pick up a family member at Pearson this afternoon, so the thread is up early, along with a few links

Before the puck even drops, the Habs already have a new injury to report. Newly acquired Blair Betts has a minor lower body injury and is listed as day-to-day. Andreas Engqvist takes his spot on the Canadiens fourth line.

Lars Eller is still not cleared for contact, and will not play tonight or Sunday when the Habs visit the Winnipeg Jets.

Tim Connolly skated briefly this morning, but is not expected back in Toronto's lineup until next week. Nazem Kadri is out with a knee injury, and Clarke MacArthur is serving his two-game suspension. The Leafs will use David Steckel on the wing, and put him in face-offs on the penalty kill. The interview from the morning skate from Leafs coach Ron Wilson (via Fan590's David Alter) is after the jump.

Question of the day: Surprised that Pension Plan Puppets hasn't asked this yet. How campy will the Leafs opening ceremony be?

Off waivers: Jeff Woywitka was claimed by the New York Rangers

David Arrigo on the new mask design for Carey Price. More from the artist's website and how you could own it, all for a great cause. 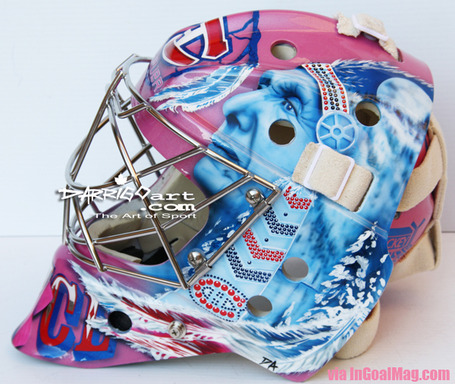