Update: The Canadiens fired assistant coach Perry Pearn, who was responsible for the defensemen and special teams. GM Pierre Gauthier is to address the media at 7pm. Max Pacioretty was in the warm-up and will play tonight

The future Hall of Fame forward has shown no signs of missing a step, since his return from the KHL, with 7 points in his first 8 games. Jagr has had an all-star career against the Canadiens. In 67 games, Jagr has 39 goals and 41 assists.

The two teams meet for the first time this season, with the Flyers taking last season's series 3-1 with a slightly different cast of characters. One of them is goaltender Ilya Bryzgalov, who is a career 0-2-1 against the Habs, during his days with the Phoenix Coyotes.

Philadelphia is coming off a 4-2 victory over the Toronto Maple Leafs. The down side to that win was the loss of Chris Pronger. The Flyers rearguard took a stick to the eye, from the dastardly Mikhail Grabovski, and could miss 2-3 weeks. But don't underestimate the Flyers, even without Pronger they have one of the best defenses in the league.

The Canadiens would like nothing more than snapping their six-game winless streak, before facing the Boston Bruins in a home-in-home series.

Max Pacioretty is nursing partially torn ligaments in his wrist, suffered in Monday's loss to the Florida Panthers, and his return remains unclear. Jacques Martin said after the morning skate that he would be a game time decision.. In the meantime Aaron Palushaj was called up Monday.

Price gets the call in goal, for the Canadiens, in quest of that milestone 100th win. "I’m one loss away from putting on a garter belt, Bull Durham style," Price said after Tuesday's practice, referring to his pink pads and mask and the team's current losing stretch.Price has dropped the pink pads in an effort to snap the losing streak. 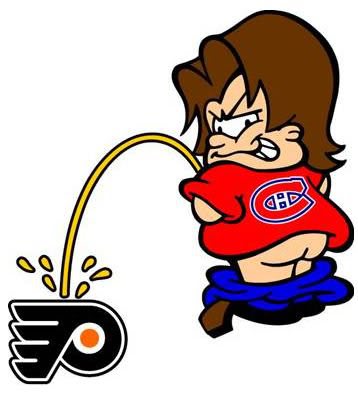