A win would be nice.

Alas, fans of the Montreal Canadiens will have to wait a couple more days until that lonely "1" in the win column becomes a "2."

The Florida Panthers came in and stole a pair of points off a team that, for some reason, cannot play a full 60 minutes of hockey. End result, a 2-1 victory for the visitors.

Montreal got onto the scoreboard first, on the power play when a Raphael Diaz shot was tipped in by Erik Cole for his first goal of the season at 3:08. Both Cole and Max Pacioretty were set up perfectly in front to screen Panthers goalie Jacob Markstrom.

The goal will set a media frenzy on Tuesday morning, following Habs coach Martin's chastising of a reporter for her question of why Cole was seeing little power play time. It might have had more steam, had the team won.

The Panthers replied with a power play marker of their own when Tomas Fleischmann's wrist shot trickled out behind the pads of Peter Budaj.

There was no scoring in the second period, but the Panthers dominated, especially on the power play. Nine of Florida's 14 second period shots were uncontested. The Canadiens did mange 13 shots in the period, but many were perimeter.

The visitors from the Sunshine State took the lead, at 5:02 of the third period, when Scottie Upshall worked his way under Hal Gill and tipped a Dmitry Kulikov shot past Budaj. It was Upshall's first goal as a Panther.

The Canadiens had started out with a sluggish third period, but managed a couple late chances. Unfortunately Markstrom is 6'3" and shut down the bottom half of the net on two huge opportunities.The Panthers netminder had 40 saves on the night, and was the game's first star.

Coach Jacques Martin seemed to take the game is stride, noting his team had a 13-7 scoring chance advantage. His comments seem to be more of the same that we hear too often after a loss like this. HabsAddict.com's Kamal Panesar's reply on Twitter: "Someone needs to tell him the house is on fire!"

The Habs remain winless at home, and next face the Philadelphia Flyers on Wednesday. 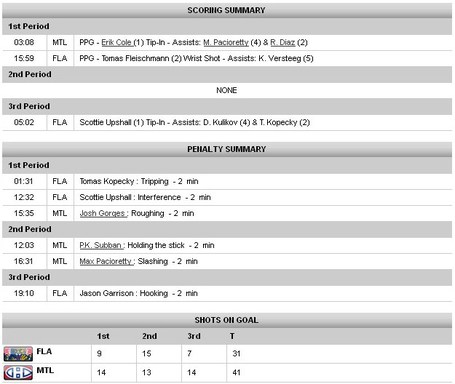 Max Pacioretty left the game after the second period, holding his arm. The Canadiens winger did not return to the game and will be re-evaluated Tuesday.

Newcomer Petteri Nokelainen was 4-0 in faceoffs, and call-up Mike Blunden had 3 hits and a blocked shot.

For a line that never played together before, the Panthers trio of Mike Santorelli, Marco Sturm and Jack Skille played impressively, more-so in the 3rd period. Maybe it's overrating, considering they were playing the dead-last team in the Eastern Conference.

The Canadiens penalty killers were dominated in their own end, despite allowing 7 shots in three attempts, and just could not clear the puck. The Panthers power play units were able to contain the offensive zone for prolonged periods of time. And Mike Cammalleri on the PK?

Watch the clock!!! Jacques Martin seemed to be in la la land, not watching the seconds ticking away, and failing to call Peter Budaj from his net. Good things he has assistant coaches.

The winning side at Litter Box Cats