HELLO, CANADA AND HOCKEY FANS IN THE UNITED STATES AND NEWFOUNDLAND WELCOME TO DOUBLE OVERTIME

A TOUR OF WILD, WEIRD AND WONDERFUL MOMENTS FROM ALL YOUR FAVORITE TEAMS

* The Maple Leafs: The NHL's most loved (and most hated) team

* West v. East—Where do the best Canadian players come from?

* What team jersey did Ozzy Osbourne wear in a mugshot?

* The greatest fight of all time!

THE HISTORY OF HOCKEY HAS NEVER BEEN SO FUN!

We don't do a lot of book reviews at EOTP, usually leaving that for our good friend Joe Pelletier. But when a submission is passed on, we like to put our two cents into it.

I was fortunate to receive an advance copy of Stephen Cole's "Double Overtime - The Hockey Fan's Ultimate Hockey Book," from Simon and Schuster. Mr. Cole is author of the hockey humor anthology Slapshots, and Xtreme Hockey! He writes regularly for The Globe and Mail and the CBC.

The book is now available for pre-order and officially hits the shelves in book stores on October 25.

The fall season is the prime time for new hockey book to hit the market, and it looks like the author has a real winner here, that should become an annual series.

Cole's book gives fans 192 pages of insight into each of the NHL's thirty franchises.

Instead of a book full of stats and records, each team has a two-page on their team's origins, nicknames, the highs and lows, etc.. The Author also ranks the team jerseys on a coolness scale of 1 to 10 and costs out the average fans ticket, beer & hot dog and parking. It's then followed up by an essay on each team, unique to each franchise. 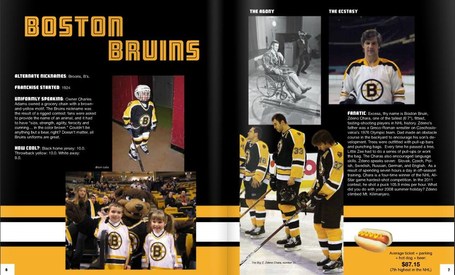 Cole blends fact and humor very well throughout the book. He admits he's a Toronto Maple Leafs fan, so not surprising there there's a little extra for fans of the Blue and White, as well as a humorous stab at the ecstasy section for the Montreal Canadiens.

The book is as current as it can get for a compilation that goes beyond the Boston Bruins Stanley Cup win. A tribute to the late Derek Boogaard is also included in the Minnesota Wild pages.

Cole also lines up the best players in Canada, through the decades, pitting them in a fictional East vs. West series for the the "Dominion Cup."

Another enjoyable aspect of this book is how Cole used fan provided photos to capture the essence of what their team means to them. You can submit photos of your own for the next edition at www.doubleovertime.ca

For the price (currently $22.50 CDN on line), you really can't  go wrong with this purchase. It's an ideal companion for any fan of the NHL, and would be a strong recommendation as a gift to any new fans of the sport.

Purchase Double Overtime by clicking the link below