Game 7: Leafs prevail over Habs in back and forth battle.

Share All sharing options for: Game 7: Leafs prevail over Habs in back and forth battle.

Fans of the Toronto Maple Leafs maintain bragging rights for the 2011-12 NHL season, as their team came out of Montreal with a 5-4 overtime win over the Canadiens.

The Canadiens opened the scoring, playing short-handed, when Lars Eller broke up the play, feeding it to Travis Moen. The Habs grinder worked through the two Leafs defenders and backhanded a shot past James Reimer at 1:51 of the first period.

The Leafs responded on the power-play at 7:07. With Andreas Engqvist in the penalty box on a botched high sticking call. The review showed that Jay Rosehill's own stick struck him in the face. In any event, the Leafs capitalized when David Steckel tipped in a point shot past Carey Price as the power play wound down.

The two clubs then traded goals in the first 1:05 of the second period. Andrei Kostitsyn raced down the left wing and ripped a shot past Jonas Gustavsson just 29 seconds in. With the Habs transitioning out of their crease, Phil Kessel was left behind and grabbed a Josh Gorges turnover, snapping it past Price.

The Leafs took their first lead of the game at 4:19, when captain Dion Phaneuf blasted in his second goal of the season.

Michael Cammalleri, playing in his second game since returning from a leg injury, tied it a three after taking a long ice pass from P.K. Subban and firing a slap shot from the left wing at 1:27 of the third period.

With Moen in the penalty box for boarding, the Leafs had a great opportunity to pull ahead. Price came up wit

h two huge saves as the Leafs power play ended to keep the game tied. After the penalty was over, the Habs returned the favor to their goalie, when Moen tipped in a Gorges shot at 9:28, putting them back in front.

The visiting team forced overtime when Nikolai Kulemin crammed a loose puck past Price. Habs fans and even HNIC thought the play should have been whistled dead earlier, when the puck was flung up into the netting. No whistle was made, and play ensued when the biscuit fell back to the ice.

Former Hab Mikhail Grabovski would be the OT hero at 1:23 , skating out from behind the net after taking a great pass from John-Michael Liles ,as two red jerseys that did not have the number 31 did nothing but watch.

The Habs have lost five straight games for the first time since December of 2009, and return to action Monday, when they host the Florida Panthers. 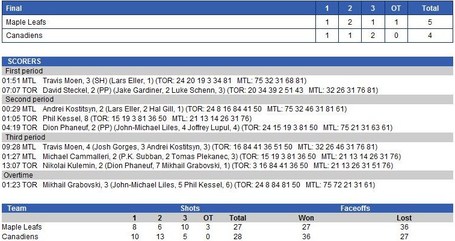 Leafs goalie James Reimer left the game after the first period, for precautionary measures according to GM Brian Burke, after a collision in the crease with the Canadiens Brian Gionta. The Habs captain was assessed a two-minute goaltender interference call, but the contact was clearly incidental.

Carey Price remains at win number 99, on another night where he can't be faulted. It was good to see the netminder show some frustration on Nazem Kadri, after the Leafs forward crashed the crease (thought Cole did shove him), and also at Matt Frattin as he came within the Montreal crease. Price later fired a puck off the glass and down the length of the ice on a penalty kill as if to tell his defenseman, "This is how it's done!"

The Canadiens were 0 for 4 on the power play, and had a total of three shots  against a team that was 25th on the penalty kill heading into Saturday's game. Lars Eller, arguably one of the best forwards on the night, saw 12 seconds of action with the man advantage. Erik Cole, who makes $4.5M/year to produce offense, had none. Mathieu Darche played 3:12!

P.K. Subban crashed awkwardly into the boards in the second period. The Habs rearguard tripped to the ice and was assisted down by Jay Rosehill (but it was not a crosscheck folks). Rosehill continued to rub his glove into the back of Subban's head as he lay face down on the ice, prompting Chris Nilan to tweet, "By looking at those highlights just shows Habs get pushed around, Rosehill standing over Subban should have been knocked into next week."

An off night for Leafs face-off specialist David Steckel, who was 15-15 on 63 of the Leafs draws. David Desharnais had Steckel's number on the evening going 8 for 13 head-to-head..

The Habs honored Hal Gill for his 1000th career game in a pre-game ceremony.

The gloating continues through the night at Pension Plan Puppets