So should Jacques Martin have started Peter Budaj against his former team? If it's a Tuesday night game, he probably does, but this is Saturday night in Montreal and the fans want to see there best players out there. Carey Price is one of those players, but it wasn't his night as the Canadiens fell 6-5 in a shootout.

Despite a strong night from Brian Gionta and Max Pacioretty, the Canadiens just couldn't keep the visiting team, that has now won four straight games, at bay.

The Avalanche got on the board first, at 4:51 of the first period, after a weak clearing pass up the boards by Alexei Emelin worked it's way back to the stick of Chuck Kobasew. The shot fooled Canadiens goalie Carey Price and slid into the net.

Pacioretty replied at 10:31 after a strong sequence, and was rewarded with his own rebound to beat Semyon Varlamov.

With the Canadiens holding a 20-9 shot advantage through 20 minutes, the game seemed to be there's to take, much like their season opener was against the Toronto Maple Leafs.

They carried the momentum into the second period and took advantage of a two-man advantage. With two Avs players in the box, Martin opted to use Tomas Plekanec on the point again. An experiment that was unsuccessful in prior attempts finally paid off. Plekanec used the open ice to skate in and find a lane, and rang the puck in off the cross bar at 1:35.

The Avalanche then potted a power play goal of their own, as David Jones drove to the net to beat Price glove side at 11:37. Less than a minute later, Paul Stastny took a P.K. Subban cough up down the ice to beat Price five-hole.

Travis Moen then re-kindled the debate as to why Martin would put him on a top-six line, as he took a Gionta pass and charged to the net to tie it up again at 15:51.

Jones then added his second of the night, at 18:42. The goal was more a defensive breakdown as Pacioretty went for the big hit on Jones and missed. This allowed the Avs forward to slip unattended where a centering pass from Ryan Wilson deflected off of Jones' skate and through Price's five hole.

For the first half of the third period, it didn't appear the home team would be making an effort to get back into the game. That was until 12:57 when Gionta slammed in a no-look backhand off a rebound from a Josh Gorges point shot.

Twenty seconds later, David Desharnais redirected a Pacioretty pass to put the Canadiens back in front. Andrei Kostitsyn also assisted on the goal, his 100th helper of his NHL career.

The scoring was not over yet, and the Canadiens could not find a way to close it down despite firing 41 shots at Varlamov through three periods. With Habs rookie Raphael Diaz in the penalty box, Kyle Quincey fired a shot off the post and in at 15:57 that would send the game to overtime.

With no decision in the extra 5 minutes, it went to a shootout where Milan Hejduk and Matt Duchene beat Price. No Habs players were able to get past Varlamov. Tomas Plekanec was 2 for 16 career going into shootouts, prior to ringing the post tonight. 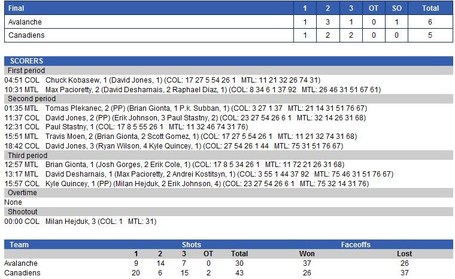 The game was a personal letdown for Price, seeking his 100th career win and stated post game that he really wanted to win it for his team. The Habs goaltender took responsibility for three Avalanche goals.

The Canadiens will need to move forward from tonight's game as they prepare to host the Buffalo Sabres Tuesday.

The winning side from Mile High Hockey