The NHL again continues to make the All-Star Game a unique and entertaining experience for it's fans, and often has little luck in doing so.

Recent changes to the selection process, introducing the Skills Competition and this year using a player draft to draw a Friday night TV market, are just several efforts to make this event a worthwhile package.

This approach has been a project in the works for over sixty years, and even then it went without any luck.

Prior to the start of the 1951-52 NHL season, the league decided to abandon it's format of playing the defending Stanley Cup Champion against a team off All-Star players. This was primarily decided as the 1950 match-up was a 7-1 blowout by the Detroit Red Wings, over a depleted All-Star squad, due to the Red Wings claiming five First and Second Team spots from the 1949-50 season.

After debating whether to scrap the game, in favor of an extended Stanley Cup final,  or make it a US vs Canada format, the league pitted the previous season's  First Team All-Stars, complimented by players from the four American teams against the Second Team, which was filled in by players from the Montreal Canadiens and the Toronto Maple Leafs. 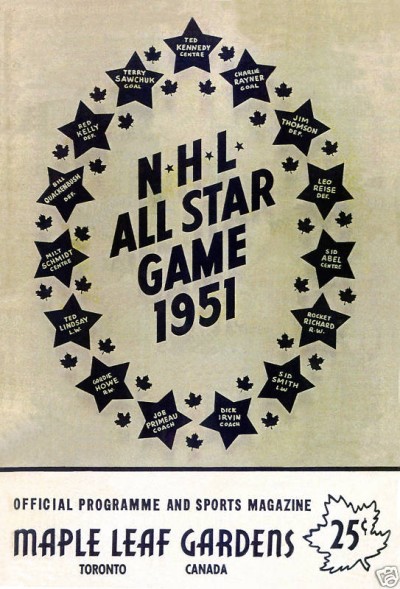 With the rivalry between Maurice Richard and Gordie Howe on the rise, and the league may have been hoping it would carry over into this exhibition match. With Richard on the Second Team, and Howe on the First, it was hoped it would bring out the bset in both players.

The 1951 game holds the distinction of being the first to be broadcast on radio across Canada, and was the first of thirteen contests to feature Canadiens legend Doug Harvey. 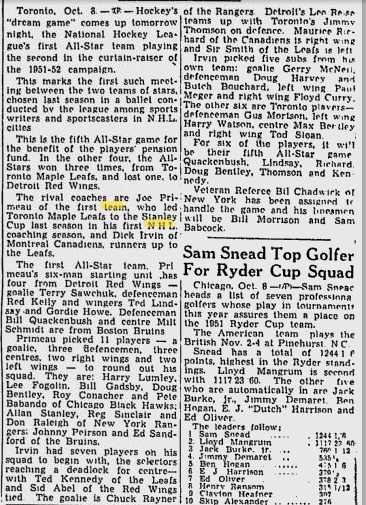 With the stage set in Toronto's Maple Leaf Gardens, the game did go without some controversy. Leafs goalie Al Rollins was the previous season's Vezina winner, but did not receive an All-Star Team award. It was thought that Rollins, having won the Cup in '51 would have been a fill in on the Second Team roster. Instead, Canadiens coach Dick Irvin chose his own goalie, Gerry McNeil, to back up the New York Rangers Chuck Rayner. 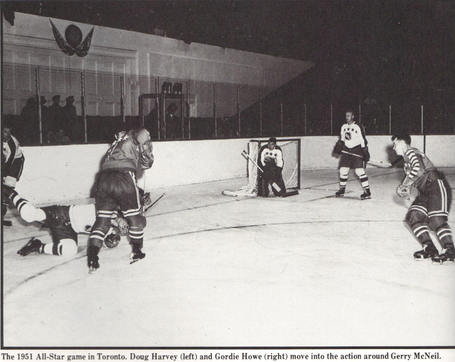 Above photo from the book, "The Montreal Canadiens: A Hockey Dynasty" by Claude Mouton

The game itself wound up in a 2-2 tie, in front of a crowd of 11,469, and raised over $16,000 for the players pension fund. It was the first tie game in the NHL's five seasons of formally presenting the game, as well as any prior recorded format. 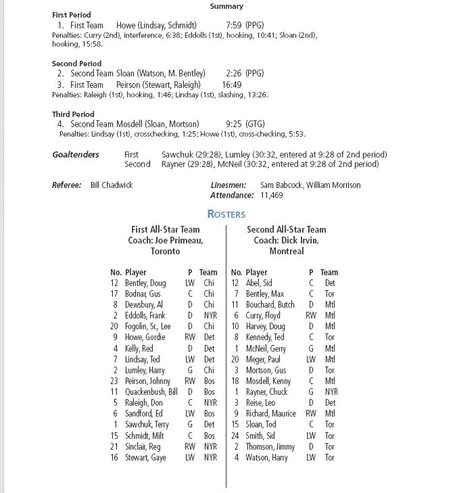 The 1952 contest went under the same format at Detroit's Olympia Arena. For the second straight year, Irvin drew the ire of the fans for picking his own players over more deserving ones. But with only two teams to draw from, one being his own, what did people expect? The Canadiens Bernie "Boom-Boom" Geoffrion made his All-Star Game debut with the Second Team squad. 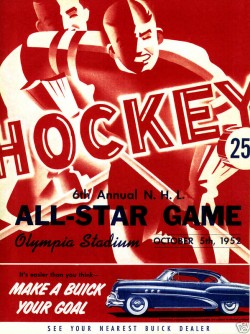 The game ended in a 1-1 tie, setting a record the lowest scoring All-Star game in NHL history (a 1-1 tie also occured in the 1956 game), and was described as a listless contest that drew few cheers. 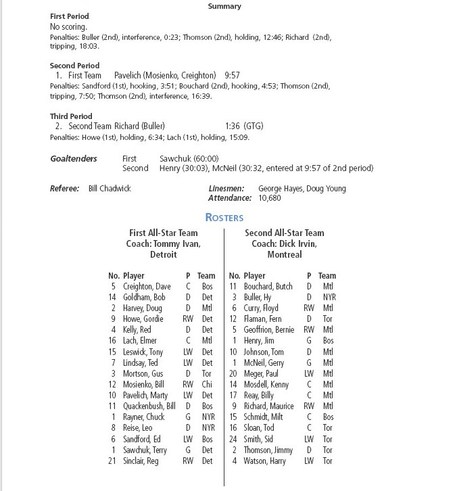 The format clearly was a failure for the league, and was criticized by media and fans alike. For those keeping score, Howe (1951) and Richard (1952) had a combined total of two goals over the two games.

Having no success with the new format, the league went back to square one the following season with the All-Stars facing the Cup champs. It remained that  way right up to the 1967-68 season, after which an East vs. West format was introduced.

Many have always felt that the Cup Winner vs. All Star Team format made it the most exciting method of presenting this exhibition. With today's NHL however, a Stanley Cup winning team is never the same at the start of a season, as they were in the pre NHLPA days, and will remain a pipe dream for many.

Another aspect of those earlier games was the competitiveness in them. Back then a spearing, roughing or even fighting major would be seen from time to time. Players had grudges with each other, and it carried over into waht was considered a friendly game. Players were even disgruntled to have to line up on the same side as a longtime rival, just for one game alone. With that considered, you have to think that body contact was the norm back in the day. We don't see that anymore, as attested to the high scoring, whistle free contests over the last 20+ years.

A special thanks to EOTP's Francis Bouchard, who got this idea started and dug up several links and photos for this post as well as this brief clip of both Howe and Richard. We suspect its is from the 1951 game in Toronto based on the jerseys.