If Bobby Clarke played against "The Rocket"

Share All sharing options for: If Bobby Clarke played against "The Rocket"

It's only January, but the Montreal Canadiens and the Philadelphia Flyers wrap up their regular season series tonight in The City of Brotherly Love.

The two teams will not meet again this season, unless the playoff brackets come into alignment yet again.

With that in mind, I decided to look back on two of the teams most significant players.

Their NHL careers began and ended nearly a decade apart, but Maurice 'Rocket' Richard and Bobby Clarke are clearly the most recognized icons of the Montreal Canadiens and the Philadelphia Flyers respectively.

Both Hall of Famers claimed several individual awards, including the Hart Trophy (Richard in '47, and Clarke in '73, '75 and '76) and of course led their respective teams to Stanley Cup victory on more than one occasion.

Individual and team achievements aside, and in light of playing in different eras, the pair have some interesting comparisons in their careers.

Both Richard and Clarke were not even expected to make it in the NHL.

Clarke honed his craft in Flin Flon Manitoba, and was an immediate star with his hometown Junior team, the Bombers. His set back was his diabetes, which he developed in his early teens, making him a questionable pick by scouts in the league. It wasn't until his Junior coach got medical certification from the Mayo Clinic that Clarke could play in the pros, provided he took care of himself.

Despite the medical clearance, his stock tumbled to the second round (17th overall) in the 1969 The Flyers considered taking him with their first pick, but it took further medical reassurance before they took the rewarding risk.

With Richard, his size and injury history before even joining the Canadiens made him a question mark. An ankle injury in his first season with the Habs prompted GM Tommy Gorman to consider getting rid of Richard, despite the protest of coach Dick Irvin. An attempt was made to trade the young winger to the New York Rangers, but Lester Patrick thought that Phil Watson was too much to give up.

Clarke and Richard both responded to the challenges that faced them, and their careers took off. Richard quickly became the most feared player in the NHL, while Clarke led the most feared team in the early to mid-seventies.

In terms of playing style, Richard was a goal scorer with exploding speed and a lethal backhand. Clarke could score, but was more of a play maker (852 assists) and a defensive specialist, earning a Selke Trophy. 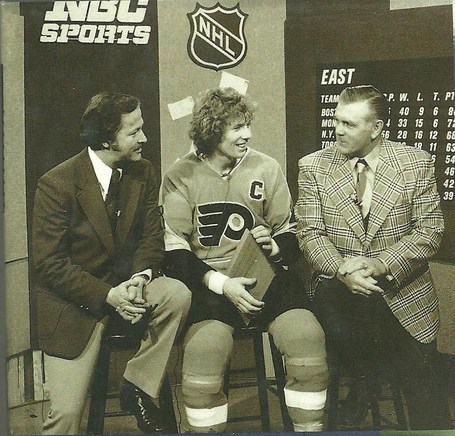 The one large similarity was their desire to compete. Both men would do what it took to win and had equally competitive fires on the ice. Richard would jump the boards with cuts and bruises and charge up the ice for a winning goal, while Clarke wasn't afraid to cross the lines when needed, if it meant winning.

It's no secret, and well documented that neither were angels when it came to play on the ice. We all know of Clarke's slash on Valeri Kharlamov in the '72 Summit Series, and Richard's retaliating temper is of course legendary in Montreal. Clarke amassed 1453 penalty minutes in 1144 games and Richard earned 1285 in 978 games, and even led the league in penalty minutes.

The Flyers captain had the rest of the Broad Street Bullies, namely Dave Shultz to hide behind. Richard, on the other hand, played in the "fight for yourself" days of the NHL and also had to survive in a non-NHLPA era of hockey ,where he was often considered the discriminatory target of the anglophone run league.

In terms of following and impact, Richard is by far the clear winner. His 544 goals at his retirement was an NHL record, and his following and legend is easily the greatest of any NHL player, past or present. Clarke however was a major impact into the development of hockey in the United States, receiving the Lester Patrick Trophy for his efforts in 1980 and leading the first Expansion Era team to Stanley Cup victory in 1975.

It certainly would have been interesting to see these two Hall of Famers go head to head in their primes. With the Canadiens and Flyers developing into a solid rivalry for over 40 years, one can just imagine how The Rocket might react to Clarke's stick work.