Eyes On A Dynasty - Day 4: Jean Beliveau's First Games, the Big Contract and the Rocket's Fuse

Share All sharing options for: Eyes On A Dynasty - Day 4: Jean Beliveau's First Games, the Big Contract and the Rocket's Fuse 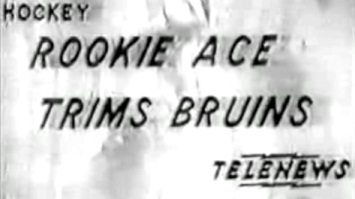 Every so often, the stars align and seemingly create the most perfect of scenarios. In Canadiens history, there was perhaps no more a long awaited prospect than Jean Beliveau, his scoring exploits hyped across North America while Habs fans drooled at the prospect of Le Gros Bill one day donning the CH. Day 4 of the Eyes On A Dynasty series looks at Beliveau's first games as a Canadien, the coverage garnered by his precedent setting contract. Later in the article, also from 1953, a little preview of the burning Rocket fuse.

Part of the excitement in following the game of hockey and being a fan of any particular team has often involved the anxious curiosity of witnessing a promising player's first NHL steps. Some of us may recall Ken Dryden's sparkling debut with the Canadiens, Guy Lafleur's patient blossoming into the Flower or Stephane Richer's first Habs strides.

Still today, the true fan has an eye out for glimpses of team prospects in their very first presentation to a viewing public. The prospect represents hope, tomorrow and better times ahead.

For Montreal Canadiens fans in the early 1950's, no player better elicited those hopes than Jean Beliveau. Practically already a nation wide star from his scoring exploits with the Quebec Aces, Beliveau was loyal to his counsel and hesitant to turn pro with the Canadiens. For many a Habs, he would have to seen, for the hype to be believed. 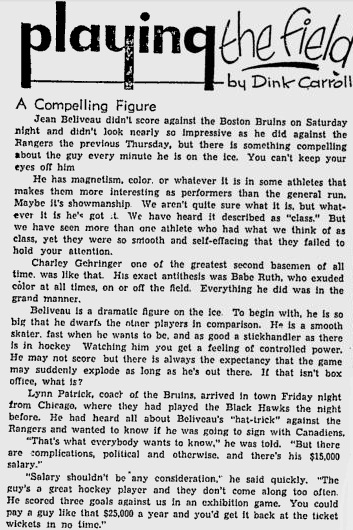 In a two game trial with the Habs in 1950-51, Beliveau had whet everyone's appetites. A 19 year old junior at the time, Beliveau, wearing number 17, tallied a goal and an assist in those games. He appeared ready for the big time. But outside of those having seen him play live, word of mouth, newspaper reports, and Sports Illustrated raves were all anyone had to go on.

Beliveau had been called up from the Quebec Aces on a three game trial beginning on December 18, and responded with a hat trick against the New York Rangers that night. Shutout before Forum fans against the Bruins on the 20th, - likely his first televised appearance - he would make amends one night later, scoring two goals.

For the game against the Rangers, Beliveau is handed Dickie Moore's number 12 to wear. Moore, injured and not yet a regular on the Canadiens is horrified. He describes what happened on the day in the short clip below.

The two minute and 45 second clip might just represent one of the earlier "Games of the Week" highlight packages. It starts with a closing snippet of the Canadiens 3-2 win over Chicago on the 11th, before the spliced newsreel account declares "Rookie Ace Trims Bruins."

Beliveau is mentioned twice in two quick sequences; a rush in which a player wearing number 20, Paul Meger, comes close to scoring, and another where he cruises into the slot and buries a loose puck for his second goal of the game.

After the second Beliveau goal, it is apparent that Jean is wearing the number 12 in this game, but in the previous sequence, he is spoken of while number 20 (Meger) skates in for a scoring chance. For the 1952-53, numerous accountings list Beliveau as having worn both numbers 12 and 20. Could it be that Beliveau wore Meger's number the night before in Montreal, thus lending to the confusion?

Before and after Beliveau mentions, scrums involving Boom Boom and the Rocket, tossing a referee to the ice, are shown. 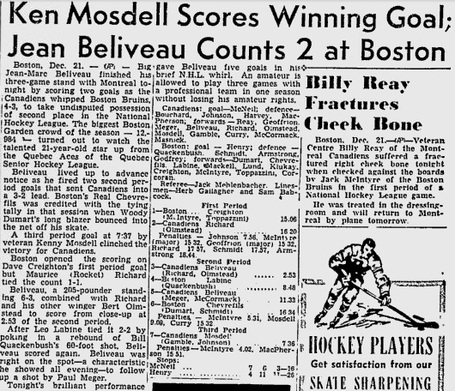 A star at an early age, Jean Béliveau was spotted by Canadiens general manager Frank Selke at the age of 15. Selke tried to get him to sign a "C-form," the usual form by which NHL teams bound young players to them. Under the form's terms, Jean would have joined the Canadiens at a set date, and at an agreed-upon salary. However, Jean's father balked, and eventually Selke had to content himself with having Jean sign a "B-form," in which only stipulated that he agreed to play for Montreal should he ever decide to turn pro.

Soon, Béliveau became a huge star in Quebec City, playing for the QSHL Aces. He was called up twice for brief appearances by the Canadiens, first for a pair of games in 1950-51 and for a three game trial in December of 1952 in which he scored 5 goals. As Béliveau led the QSHL in scoring that season, pressure mounted on the Canadiens and Selke to sign the rising star. However, Beliveau was loyal to his Quebec employers and didn't appear to show much interest in playing professionally. The worst kept secret in hockey at the time was that Beliveau was earning close to $10,000 per season with the Aces, and was lavishly gifted with cars, assorted gifts and paying endorsements.

Finally, Selke got an idea—if the QSHL were somehow turned into a professional league, Béliveau would be forced to turn professional as well, and under the terms of the B-form he would have to sign with the Habs. At Selke's suggestion, the Canadiens bought the QSHL and converted it from an amateur league to a minor pro league. This forced Béliveau to the bargaining table with the Canadiens, who ostensibly opened the Forum vaults to award him a $100,000 contract, the richest in hockey, over the next five years.

The signing date, October 3, 1953, proved to be one of the happiest days in Canadiens history, ending the three year long courtship of the province's greatest prospect. 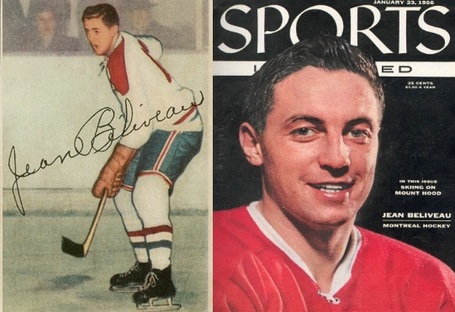 A Hockey Donnybrook in New York

With games regularly shown on television came the inevitable highlights packages of goals, great saves and fights. In this 1953 tilt, a prototypical Richard goal is featured, along with saves and pucks that eluded New York's Gump Worsley and the Habs' Gerry McNeil.

In this feature clip, a narrator with a New York accent refers to the Canadiens as the Flying Frenchmen and the cameras move inside the Montreal dressing room before the game. It's hard to say why coach Dick Irvin has a mic in his hand. Perhaps he wanted to interview Billy Reay's balding head!

Sticks are beginning to fly - this looks like war!

Keep an eye out nearing the three minute mark on the progress bar, as Richard swings his stick and cuts a two inch gash in Eddie Coleman's scalp! Eddie's okay, but he needed eight stiches!

The Rocket received a major for that one, but returned to score a second goal to make the game 4-2.

That's all the scoring, but the Rangers win a hockey donnybrook 4-3!