Share All sharing options for: Eyes On A Dynasty - Day 3: Hockey's First Televised Games In Canada 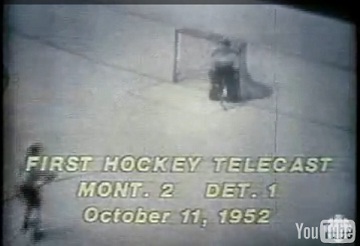 In Day 3 of the Eyes On A Dynasty series, we turn back time to a day likely recounted to our generation by our parents or grandparents. What a momentous occasion it must have been for hockey fans in Canada, being finally able to view games on network television starting in October 1952. Akin to a revolution of the mind, the moving pictures helped connect images for many, brought forth by years of listening to games on radio, reading accounts in newspapers and collecting hockey cards, piecing together how their heroes played the game without ever having seen them. The hockey fan, thanks to television, could now put it all together.

The CBC's first ever hockey telecast in Canada was not a Canadiens or Maple Leafs game, and it came in the spring of 1952. The occasion was the Memorial Cup final, a 10-2 win by the Guelph Biltmore Mad Hatters over the Regina Pats. Unbeknownst to many fans of the game, the very first televised hockey games began south of the border from New York's Madison Square Garden twelve years earlier. On February 25, 1940, the soon to be Cup champion Rangers hosted the Canadiens, then bottom feeders in a seven team NHL. The station broadcasting to a tiny handful of television receivers was W2XBS in New York. The Rangers won that game, 6 to 2.

Of course, hockey fans in Canada in 1940 were still dreaming of the day games would be televised. For most north of the 49th parallel, this occurred on October 11, 1952.

The first National network telecast occured on January 11, 1958, and not the January 23 date that splashed across the screen in the clip you are about to see. Montreal defeated the Rangers on that night by a 9-3 score.

In terms of Montreal Canadiens history, the beginning of the television era coincided with the club's most celebrated era. Hockey fans in Canada were being born Canadiens fan. There were a number of perfect storms.

On October 11, 1952, the first very Canadiens game was broadcast in french with René Lecavalier calling the play by play. The portions of the inaugural La Soirée du Hockey shown here is hardly Lecavalier at his best, but it offers a glimpse of what viewers who had never taken in a live game could finally see.

This season opener against Detroit was a greatly anticipated game considering that the Red Wings swept Montreal in the previous Cup finals. The Canadiens won this contest by a 2-1 score.

From text below the You Tube clip:

Television sets were prohibitively expensive for most Canadians in 1952. Only 10 per cent of households in Canada had one, so most of those watching at home were well heeled enough to have attended Canadiens games in person. The Canadiens win bolstered many fan's positive impressions of the groundbreaking experiment. English Canada got its first glimpse of televised NHL hockey three weeks later. Foster Hewitt ascended the Maple Leaf Gardens catwalk in Toronto to provide play-by-play for the final two periods of a match between the Leafs and the Boston Bruins.

Asked by interviewer Tom Foley, about the progress of televised hockey across the nation, Senator Hartland Molson, owner of the Canadiens replies:

"I think it's a very great thing to have it go right across the country, because everybody knows of the National Hockey League, everybody knows it's the best hockey in the world, and I think Canadians all over Canada should be able to see it."

An extended 14 minutes of footage from the Detroit game is available from the Radio Canada Archives site. The action begins in the third period, with strong play from the Rocket, Lach, Harvey and Floyd Curry.

In this clip, among other things, we see the great Maurice "Rocket" Richard jumping into the arms of Lach after he scores the 1953 Stanley Cup winning goal in overtime. What most viewers surely did not know at that moment, was that Richard thrust himself so excitedly into Lach, that he broke his centerman's nose.

This second clip features more footage of that first Detroit game broadcast, especially focusing on the play of Lach for the first minute. From there, the clip shows another first, according to play by play man Lecavalier, and it occurred on a Saturday November 15, 1952 telecast. At 9:03 of the third period, with the Canadiens leading Boston 2-0, a fight breaks out between Doug Harvey and Milt Schmidt that draws major penalties. Lecavalier states as it happens, that it is the first time the broadcast has had the pleasure to show fans a fight on television. As referees step in, a second tilt breaks out between the Habs' Dollard St. Laurent and Leo Labine.

The 1952-53 season culminated with a Canadiens Stanley Cup victory, the team's eighth title. In describing Elmer Lach's overtime come winning goal against the Bruins, Gallivan employed Foster Hewitt's familiar "He shoots he scores!" exclamation made popular by the Leafs broadcaster on radio.

Gallivan was known for his colourful descriptions of action on the ice. Hard shots became "cannonading drives"; saves were "scintillating" or "larcenous" rather than merely spectacular; and, after a save, pucks tended to get caught in a goalie's "paraphernalia" (goalie equipment). If the goaltender made a fantastic or impossible save, he would refer to it as a "hair raising save" or that the goalie "kicked out his pad in rapier-like fashion" to foil a "glorious scoring opportunity". He would use words such as "anemic" to describe an ineffective offense or powerplay. He also coined phrases like "nowhere near the net", when a shot would go wide, comment that "there has not been a multitudinous amount of shots" to describe a game with a "dire dearth" of shots on net, would mention that a defender was "wasting valuable seconds in the penalty" when they were ragging the puck, and would almost always announce, "and the penalty has expired!" at the end of a penalty. The ultimate Gallivanism was a word he coined: the "spinarama," which described a player evading a check or when a player would deke a defender with a sudden 180- or 360-degree turn. Its chief practitioner was Serge Savard, so the move was also known as "The Savardian Spinarama".

In Gallivan's early days on Hockey Night In Canada, he was often joined in the both by analyst Frank Selke Jr., son of the Canadiens manager who would later go on to be the GM of the California Golden Seals. Selke Jr. was also the Canadiens publicity director from 1951 to 1965 and appears in the team photos of the era. By the mid 1960's, he was replaced by Dick Irvin Jr. alongside Gallivan. The above clip shows Gallivan and Leafs from an April 9, 1960 playoff game at the Forum between the Canadiens and Maple Leafs.

From the 1952-53 season onward, Hockey Night In Canada made an imprint on every hockey fan, It was an auspicious and iconic debut that would never leave us. Things would never be the same again, and that was a great thing! 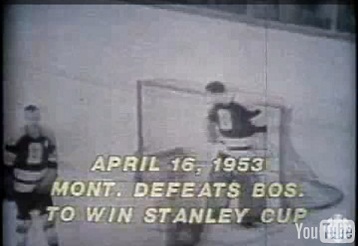