Share All sharing options for: Eyes On A Dynasty - Day 1: Iced Lightning 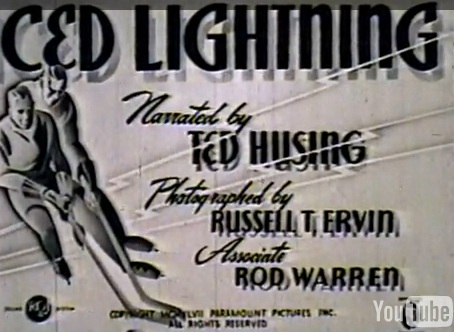 A historical film document in every intent, Iced Lightning was designed to show the game from it's youthful beginnings from streets and parks through to the profesional NHL game. Produced by Paramount Picture's Jack Eaton, the film highlighted hockey in the city of Montreal and a Canadiens club fresh off its sixth Stanley Cup in 1946.

Prior to the first televised hockey games and with Hockey Night In Canada a pipe dream at this point, the movie theatres were where many people first saw moving footage of hockey being played.

As youths, several stars at the time, such as Maurice Richard, claimed they never witnessed a live Canadiens game until they played in one. Only a decade later, players such as Jean Beliveau and Jacques Plante would tell that their first experiences in becoming Canadiens fans came over the radio, listening to the exploits of the Rocket and crew.

The silver screen is where hockey was most often displayed at large, in the form of full length movies that more often than not, played up the game's more violent aspects.

Movies such as the King of Hockey (1936), Idol of the Crowds and The Game That Kills (both 1937) were noteworthy only for having connected the storylines to underworld themes such as suspicious team owners and players on the take.

While these were hardly cinematic classics by any means, the movies did have some basis of truth, as New York Ameican's owner Bill Dwyer, a prohibition bootlegger and mobster seemed to be central to Hollywood ideas of what hockey was all about in the 1930's. Nonetheless, this was for many people, their introduction to the Canadian game of hockey south of the border.

Imagine, the "Duke" John Wayne as a hockey player!

Today, Brian Burke would draft this guy if he didn't know his real name was Marion! 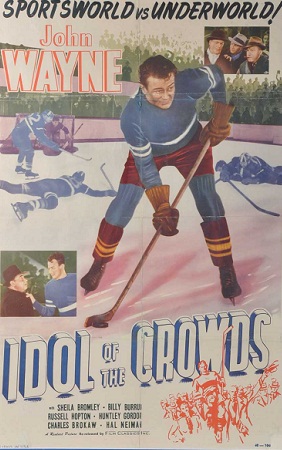 In 1938, someone was busy filming the Canadiens in action, but sadly details have been lost to time. On November 4 of that year, a small note in the Montreal Gazette that movie goers in Montreal were shown scenes of the Canadiens at practice, and that those in attendance cheered at the sight of the film footage.

Likely in the early 1940's, as filming capabilities progressed, someone surely thought of representing the game of hockey in a more positive light. That could quite well have been the inspiration for Iced Lightning. The ten minute short on the Canadiens was not to be the last of its kind.

Parts of Iced Lightning were filmed on at least a pair of occassions, the first being on November 1, 1946 during a Canadiens and Maple Leafs game at the Forum. Another date film crews were in Montreal later that season, was on February 6, 1947, when a Gazette article referred to a film shooting during a practice session for Grantland Rice's Sportslight series.

Note: The November 1 filming was engineered for entirely different purposes that a simple movie clip. It is actually a very interesting story that plays into the ever-growing Habs and Leafs, Frank Selke / Conn Smythe rivalvy. More on this here. 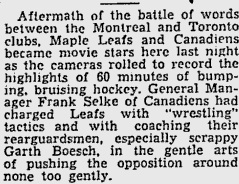 Other clips of the Canadiens may have been filmed as late as March 1948. Much footage was taken outside in the great Montreal winter, where teams of different age levels competed on outdoor rinks city wide.

Released in 1948, the movie's focus is all Montreal, at a time when the city was Canada's largest. The movie backtracks the history of the game all the way to McGill University in 1875, mentioning hockey's progressive stages along the way. 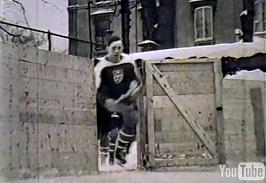 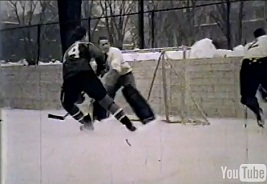 One error in the narrative commentary, the very first pucks were never "a three sided cube", whatever that is supposed to be!

The first action scenes show a McGill Redmen team during an outdoor practice, while rule changes over the evolution of the game are discussed. Just past the minute mark in the clip, kids are shown playing street hockey in it's most primitive form while narrator Ted Husing describes the game's simplicity. Precious is the kid padding his shin with a catalogue, rapidly performing the task as though he could do it blindfolded. 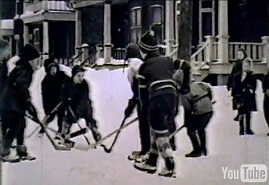 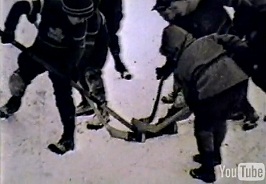 At this time in the city, there were 144 free outdoor rinks in the Montreal area, which is said to be of a million and a half population. All rinks were run by the city's recreational department, churches and schools.

You get a sense, by the sheer numbers mentioned as participants, as to why the Canadiens club would become so strong in the coming decade. Little wonder it is referred to as the hockey center of the world. 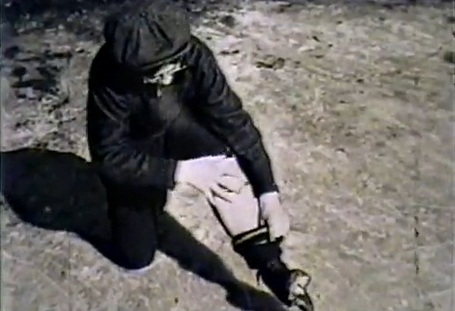 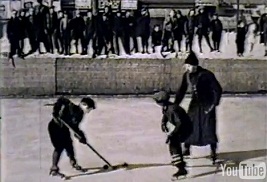 By the clip's three minute mark, female hockey players, referred to as "tomboys", participate in the outdoor games. The ladies are actually from the Royal Victoria half of McGill University, are appear quite adept in the skills of the game. Next up is footage of an all-black Royal Canadian Legion team from the city during a practice session. 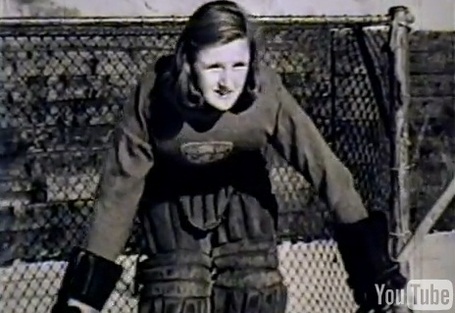 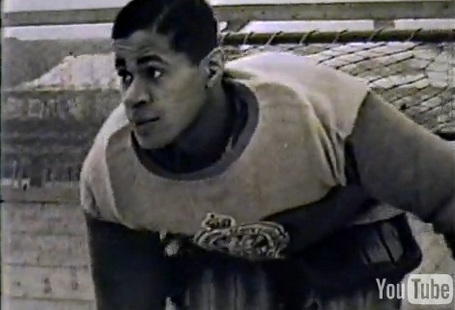 The first glimpse of a player dressed in Canadiens colours is Howie Morenz Jr, filmed during an outdoor practice across the street from the Forum at Atwater park. Morenz Jr, was in the midst of a 42-26-68 season in 27 games with the Juniors in 1946-47, when this rare footage was taken. Here we see scrimmages, pitting red versus white teams, in drills run by coach Wilf Cude, the former Canadiens goalie. 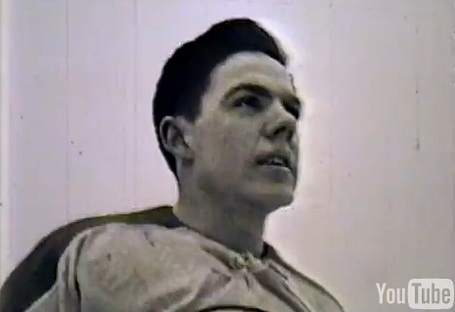 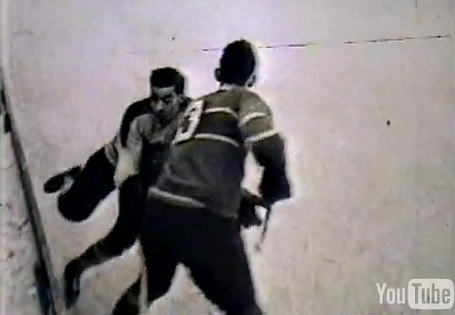 It is 4:50 into the clip when we are finally introduced to the big boys, the defending Stanley Cup champion Canadiens, featuring many of the legends from the 1946 Cup win.

The camera crew filmed the Habs on separate occasions, one being the game involving the Maple Leafs on November 1, 1946 and on another occasion the following season, when goalie Bill Durnan was named captain in Toe Blake's absense.

Footage begins inside the Canadiens dressing room, as we see players such as Blake, Elmer Lach, and Butch Bouchard going through their pre-game rituals. 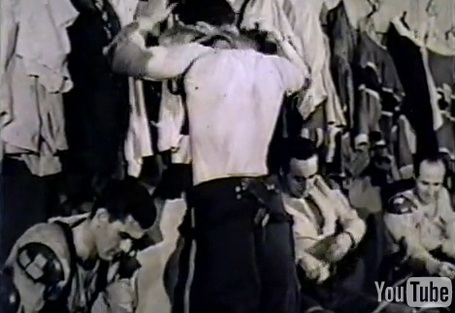 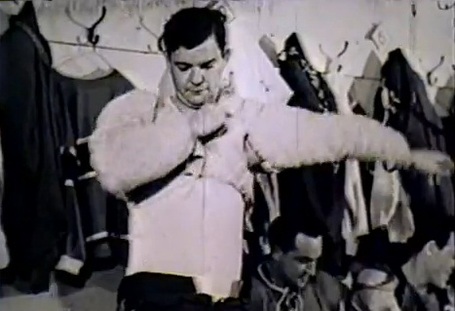 The narrator mentions that the Canadiens have won more Stanley Cups than any other team, but the gap in wins was not quite as wide as it is today. When Montreal won their sixth in 1946, it put them one ahead of Toronto (Leafs, St. Pats and Arenas). The Red Wings, Rangers and Bruins all had 3 Cup wins to their credit, with another two going to the Blackhawks.

"It is more than a speedy body contact game, it's a bruising, smashing sport, and calls for much padded protection", goes the narration, but as we can see, the equipement of yesteryear would see an entire team carried off on stretchers today.

As we watch Bill Durnan dress, he is compared to a boxer and a footaball player, and referred to as "a human target for that fast speeding puck."

A close up shot gives us a good look at the ambidextrous Durnan's two catching mits.

Incidentally, the captain's "C" on Durnan's sweater dates some of this footage between January and March of 1948, after the career ending injury to captain Toe Blake. Interestingly, we see both captains on ice together seconds later. Blake, who suffered a double ankle fracture in a January 11, 1948 game against the Rangers, never returned to active NHL play, but is seen in team functions following the injury. It could be that the sequence of film clips are not in historical order. 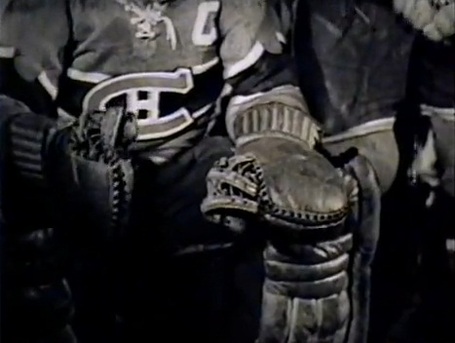 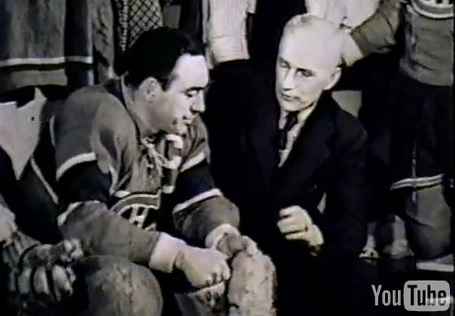 As coach Dick Irvin appears, the team heads out onto the Forum ice to practice. We see the strides of the legendary Maurice "Rocket" Richard, who is mentioned as the game's highest paid player at the time. Only into his fifth season at the time, Richard is described as "not a rough player."

A red and white scrimmage follows, and you can see Ken Reardon and Butch Bouchard give a heavenly heave to a Habs' forward attempted to split between them. Moments later, on a second try, forward Bob Carse manages to slip around rearguards Glen Harmon and Roger Leger. 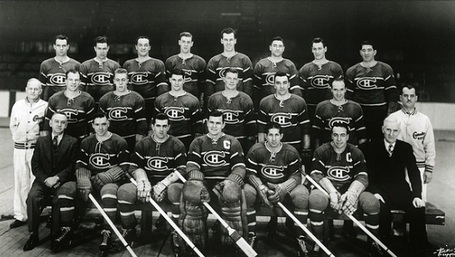 Footage of the Canadiens and Maple Leafs game one season earlier on November 1, 1946 is then shown. Both teams are wearing dark jerseys, which seems to lost on the narrator, who is describing the game in colour.

Rough play from the era, sticks pointed and high, is shown, as the narrator tells that offenders go "off the rink, in the clink!" for violations of the rules.

Bring that saying back to hockey jargon, anytime!"

"Montreal and Toronto are natural and bitter rivals!" That little has changed! A two handed tomahawk chop by a Leafs player follows that note.

"Even the referees can't begin to pin the penalties where they belong."

Did I mention little has changed!

As an eight player scrum breaks out along the boards, our narrator exclaims, "THIS IS HOCKEY!" 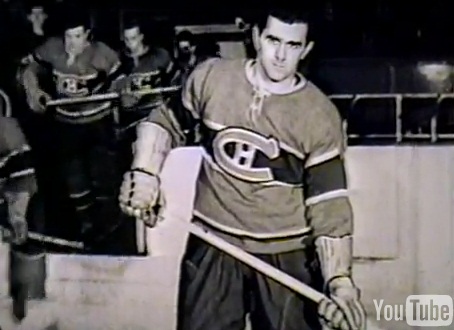 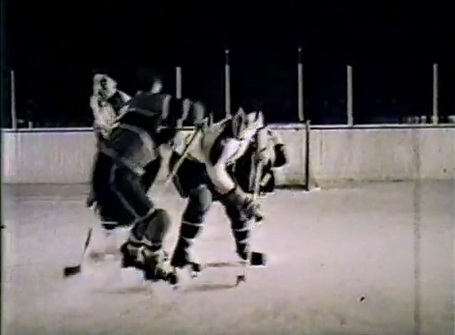 Unfortunately for the film crews, the game was not an offensive one, goal scoring wise. The lone Canadiens marker is scored by George Allen, the Habs only goal of the 1-1 tie, despite the narrator's proclamation that Montrealwon the game.

The final shot of the film is that of the stove pipe Stanley Cup, as it was at that time. 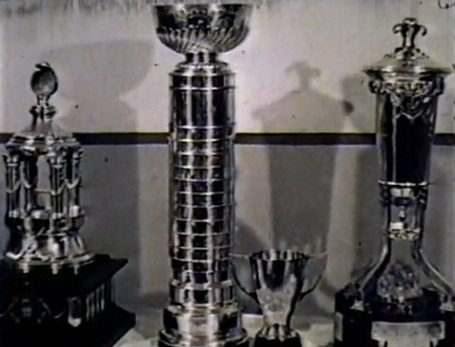 That in a wrap, was the game of hockey at the dawn of the 1950's, just prior to the television era making it all just a tad more real.