Ever since Trevor Timmins shocked the hockey world by taking goaltender Carey Price fifth overall in the 2005 Entry Draft, the son of the chief of the Ulkatcho First Nation has been the subject of a lot of debate, both logical and illogical.  Goaltending and the Montreal Canadiens always makes for popular water cooler talk, newspaper copy, blog article or broadcast television feature in this country, and Price has provided plenty in all those various disciplines in his five years in the Canadiens organization.  In this age of the internet and every Habs game airing on cable television, there's been all kinds of crazy following the young man as he ascended to the role of starting goaltender for the Habs, including "scandalous" photos of him partying in Mexico, and disdain over him joking with "Cabbie" on The Score after a playoff loss.  He's been booed, gotten angry at the fans, gotten angry with his teammates, and even shot a puck after a Washington Capitals goal right at the goal celebration in this past playoffs.

And despite all that, he's still the Canadiens greatest hope, the top player in the organization under the age of 25 according to our vote. Five of the seven participants gave him a first place vote, and the other two gave him a second. So why, despite all this turmoil, are we still so very high on his abilities?

For starters, there aren't many goalies who have played as much top level hockey as him at his young age. Ryan Miller was just getting his feet wet as a professional at Price's age, playing 15 games for the Sabres but ultimately not cracking the lineup for another two years.  Cam Ward won the Stanley Cup at age 22, only to struggle the next year and post an average season the year after.  Marc-André Fleury was coming off a year in which he had a .906 SV% and an .880 SV% in the playoffs, only to break out with his first big year at that age.  Carey's quick start, followed by his well documented struggles in 2008-09 and then a decent, but inconsistent, year at age 22 aren't exactly uncommon.  Most goalies aren't even in the league at his age, Price has put up decent numbers for a goalie who has been there.

Does that make him the next great goaltender?  No, but there are many legitimate reasons why we're still quite optimistic about his progress.

Perhaps the most intimidating factor about Price is his level of athleticism for a goaltender that is listed at 6'3", 219 lbs.  His lateral movement allows him to challenge shooters from the top of his goal crease, giving very little room on the first look, and yet still push off quickly to make a save on the one timer.  Witness Matt Cooke of Pittsburgh get robbed on a comedy of defensive errors here:

His glove hand, much maligned during the 2008 Stanley Cup playoffs, certainly doesn't look like a weak point anymore.  When Price broke into the league, his goaltending coach was Roland Melanson, a butterfly specialist who aided Jose Theodore into a top tier goaltender (albeit briefly).  Melanson's style helped Price make an immediate impact, but ultimately made Price a bit of a creature of the habits he was being taught.  This isn't Melanson's fault, per se, but probably a natural reaction of a student to his teachings:  he was relying less on his natural ability, and more on the fundamentals of goaltending as taught by Melanson.  His glove was being put in the proper position, but Price seemingly couldn't make any adjustments when he was going down into his butterfly.

When Melanson was replaced by Pierre Groulx last year, the first noticeable change in Price's game was to maintain an aggressive stance.  Groulx's approach matches that of his offseason coach, Eli Wilson, and is more based on the hybrid style popularized by the wave of Finnish goaltenders that have come through the ranks. It seems to have worked well for Price.  It plays to his natural size advantage, and allows for a more reactionary approach for his glove hand.  When he goes into his butterfly, he's also very quick to get back on his feet. This could all be a matter of improved patience, but seeing the pattern of Melanson's previous protigés leads me to believe this was a targeted change by Groulx.

Another strong asset of his game is his puckhandling skills.  It's a bit of a double-edged sword for Price:  he's extremely confident in his abilities, and that can sometimes make fans tense up when he spends a lot of time looking for an outlet pass and a forechecker is baring down on him.  But on a team that has struggled in breakout plays during his tenure, Price has certainly helped the team's cause.

So he's big, quick on his feet, has strong reflexes and is a great puckhandler.  And we're supposed to believe this guy sucks because he hasn't dominated the NHL before his 23rd birthday?  It's generally the belief of the panel here that Price has yet to reach his peak performance age, and there's no reason to think that he can't do so in Montreal.  I suppose that's where we might differ from the prevailing common wisdom surrounding the goaltending position in Montreal:  that Price needed out and that Halak had claimed the title in 2009-10.  For all the talk about Price's alleged shortcomings, that he was somehow not mentally strong enough to handle the unique pressures of the Montreal market, that he let bad goals and games haunt him, or that he was immature, no one ever gave real tangible evidence as to why that was.

I can't possibly explain what is going on in Carey Price's head when he gets booed, or what the last thing he thinks about before he goes to bed is.  To me, any talk of a player's lack of cajones is simply projection by the person making the accusation.  The fact that Price has never, to anyone's knowledge, requested a trade or bemoaned a lack of playing time suggests he's taking the experience in stride to date.  He's clearly been frustrated, of that there is no doubt, but he's back for two more years as of yesterday without a contract holdout. 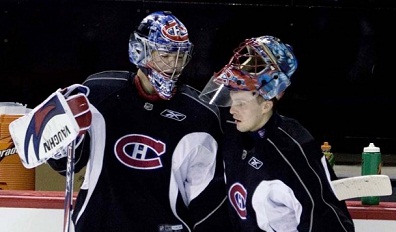 Of course, a discussion about Price wouldn't be complete without one on Jaroslav Halak.  We don't know if Halak will be a better goalie than Price, but we do know a rational decision on the matter was pretty hard to come by after the season was over.  Price's season was a failure, despite posting improved numbers from 2008-09, and Halak's season was unbelievable.  We've seen a season like Halak's before in Montreal, in fact we saw it twice in the last decade.  Jose Theodore in 2001-2002 and Cristobal Huet in 2005-06 posted similar seasons, and it didn't predict future success for either goalie.  We won't know how Halak could've handled the additional expectations (there is that pesky mental analysis again), but we do know that goalies generally don't repeat such high end seasons with regularity.  It's quite possible Price posts a similar season to Halak in the next couple of years.  And it's possible another trade scenario could present itself at the time. Would the Habs deal Price in the same situation?

Is it wise to build your team around a goalie in today's age of disposable goalies?  Inevitably, some team will always think so.  It's prudent that the Habs don't continue to rely on superhuman goaltending efforts in the future, because we haven't seen many teams that do so have success in the Stanley Cup playoffs, or the regular season for that matter.  That being said, Price is still an incredible talent, and the consensus choice as the best young asset the team currently possesses.  He's won internationally, in the AHL, and has had great seasons in major junior and the NHL already at age 23.  He'll likely have a few good to great years in the NHL, and if our panel is right, they're betting on a good to great career.  It's a risk we're willing to take based on the evidence so far.

And if not, the guys that have bet on him might end up working with Price again in the future, this time as rodeo clowns.