Share All sharing options for: Guy Lafleur talks to EOTP!

Guy Lafleur is long since retired from his playing days, but that clearly hasn’t kept him from being busy in other walks of life.

The Habs legend, who turned 59 earlier this week, made an appearance at the base of the CN Tower in Toronto on Saturday as part of Call2Recyle’s battery recycling campaign.

I had a brief opportunity to sit down with the man who essentially was the face of the Canadiens in the seventies and early eighties, and pop a few questions on his environmental campaign, the latest developments in his life, and the pressure of playing in Montreal.

For several years, Lafleur has been involved in the recycling of household batteries. Many will recall his cell phone recycling ad from 2003.

"Batteries contain so many hazardous chemicals and I felt this was a great cause to get behind," Lafleur said. "At one time everything went into one pile, now there’s a (recycle) bin for everything."

Fans lined up in the hundreds, with their used batteries in hand, for a chance to get a signature and photo with the Canadiens all-time points leader  .

"Wow you must have brought a lot," Lafleur said as one fan had an armload of memorabilia, provided in the exchange, to be signed.

"I bet none of his remote controls or phones at home work right now," I said. As we shared the laugh, the fan pointed at me and said, "Yeah, but you get to sit beside him!"

"This has been a great event, said Call2Recycle’s Dana Barker. "I’m from Atlanta, and you certainly would never see a turnout like this."

You can insert your own Atlanta Thrashers joke here, but I replied , "You think this is a big crowd for a hockey player, just imagine if this was in Montreal!"

Update: Call2Recylcle stated that the event drew nearly 3000 visitors, and 2500kg of batteries were collected.

Lafleur’s charity work and giving back to the community has also garnered the attention of the NHL Alumni Association, who will honour him as their Man of The Year on October 4.

The award has has been bestowed on several members of the Hall of Fame, since it’s inception in 2002, including Lafleur’s childhood idol, Jean Beliveau.

"I didn’t even know what the award was for at first," he laughed. "It was originally scheduled for October 7, and my whole family was going to come. Unfortunately because of the NHL schedule, it was moved up so I am going on my own."

From there, Le Demon Blond will embark on his farewell tour of Quebec. His final appearance will be on December 5 at the Bell Centre, where he will play on a team of Habs Alumni against a team of Hall of Fame legends."

"So after December 5th, that’s it on skates," I asked him. "Not even if Mrs. Lafleur wants to go for a family skate at the local rink?'"

"Yes, that will be it," he grinned. "I’ve been thinking about doing this for the last three or four years.

"I get up in the morning and my back is sore, plus I’m heavily involved in my restaurant. That’s a lot of hard work and takes up six or seven days a week." 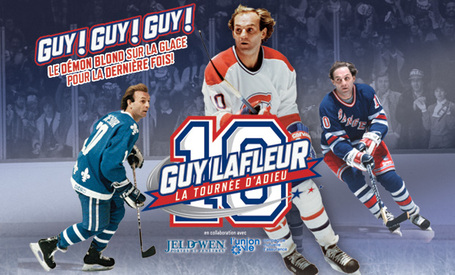 The tour caps off what could be called a comeback year for Lafleur, at the personal level, after his conviction for giving contradictory evidence was overturned by a Quebec Court.

It also appears that Lafleur will remain on as an ambassador for the Montreal Canadiens. "It’s in negotiations, and we’re close to finalizing it," he said.

Amazing, isn’t it? Thirty-nine years since he was drafted by, the Montreal Canadiens, and he’s still in negotiations with them.

With the recent booing of Carey Price by the Habs faithful, in a preseason game earlier in the week, I inquired into how he handled the pressure of the Montreal masses.

"Winning is important in Montreal, and there is so much pressure he said. "These days players salaries are made public as well, so the fans expect the players to play to that level every night."

In the heyday of Lafleur’s career, winning was never really a problem, as attested to his five Stanley Cups with the Canadiens, the pressure still remained albeit with far less public attention.

"It was so much different when we played," Lafleur added as he noted my camera and cell phone. "Back then we didn’t have those, so every little thing wasn’t made public on the internet, or made available to the media."

As Lafleur said, during the Canadiens Centennial ceremony last December, "You fans partied on some nights, but we partied every night."

You have to wonder if things would have been different, for members of he Canadiens in the seventies, had modern technology been around. Just remember how some fans were outraged some fans were at a photo of Price, with a beer in his hand, in the post-season! 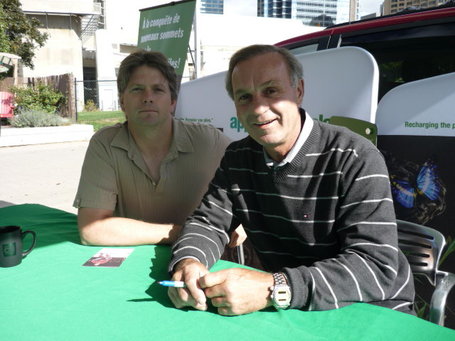