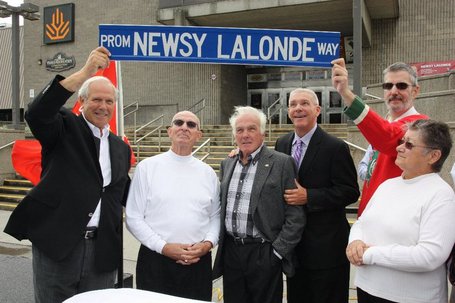 For Cornwallites long disappointed with their city's failure to recognize the career and exploits of Montreal Canadiens great Newsy Lalonde, September 22 served as a day reckoning.

For members of Lalonde's family, it will be a day they will likely remember they rest of their lives.

Cornwall pulled out all the stops in making sure the day was not only memorable but done right as well, inviting Canadiens' legend Henri Richard and Habs alumni president Rejean Houle to the festivities. 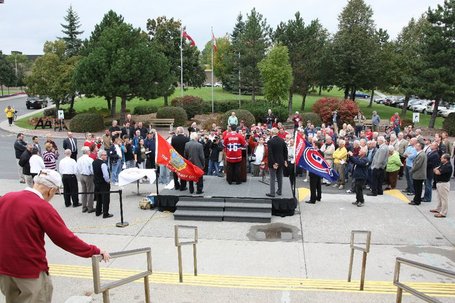 The public was invited along to the ceremonies, held outdoors at the foot of the Civic Complex steps. Despite the windy and rainy weather, hundred of fans showed, many wearing the retro jerseys of the team's centennial season. They watched as the city presented a plaque renaming the laneway leading to arena as "Promenade Newsy Lalonde Way." and presented a ceremonial street sign to relatives of Lalonde. Inside the Complex, a mural dedicated to Lalonde's career was unveiled to the appreciation of all onlookers.

I was privileged to be a part of this day, and I owe a great thanks to the relatives of Newsy, who were insistant that I follow them through every step of the afternoon, suggesting I was an honourary family member for the day. They included Newsy's great niece Lorraine Johnson and her husband Gerry, great-grand niece Sharon Johnson and grandson Richard Quintal. each of them made me feel quite special, and it is a day I will forever remember, if only for being able to share in their joy. Watching their reactions to everything made my day. 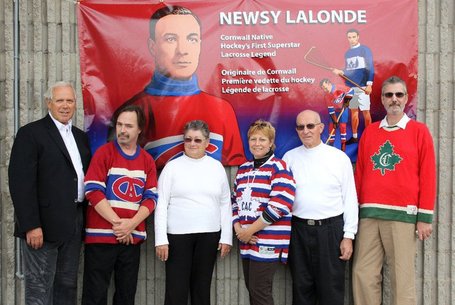 It was especially touching to witness the attention those involved in the project paid to Mr. Quintal, proud grandson of the hockey legend. Quintal's father passed away when he was just a youngster, and Newsy helped raise him. The pair spent immeasurable quality time together as Richard grew up, and one only needs to spend a few moments with him to understand how deeply he reveres his grandfather, and with good reason.

Having researched the Lalonde family tree with Sharon over the past year, I'd long known of Richard and his relation to Newsy, but we had no clues as to where he lived. About two months ago, during a photo search online, I happened across a site of his daughter's - a professional photography website in Montreal - and that lead us to Richard. Today was the first time I had met him, and he had not seen the Johnson side of the family in 40 years.

Richard was totally taken with today's ceremony, regaling everyone with tales of Newsy that only he could tell. He mentioned how in his life, he would often come to Cornwall, or pass through, and think that this was where his grandfather was born. He found it sad that he had memories of time spent in town with Newsy, but that the city had no lasting tribute to him. He was beside himself today, being here and a part of it all, on the day that changed. 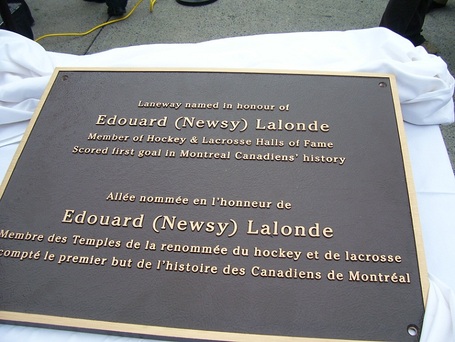 For Habs watchers that made the trip, an hour long line of autograph seekers lined up before Houle and the Pocket. They were something to behold, that pair.

The repartee between the two is absolutely jovial. As Houle and Richard were teammates but for two seasons, the dressing room jockularity between them abounds despite their difference in age. Whether it was at the podium outside,mingling with fans, sitting for the camera crews, or simply having lunch, the barbs are constantly flying.

You'll see in the clips below when Houle gets a good shot in at Henri, mentioning that in his day, the younger players learned a great deal from the veterans. He then turns to the 11 time Cup champion and ask how many seasons he played along Newsy' side. Later in the day, Houle was speaking with some fans, talking Hab tradition, while listing the run of Canadiens greats starting at Newsy.

"....and after Joliat, there was Morenz, there was Rocket, and Beliveau, Plante, Dickie, Pocket, Boomer, Savard, Lafleur...," lists Houle, as Richard is poised to interject "....and the great Reggie!"

You could tell, it was hardly the first time they enjoyed this little schtick. 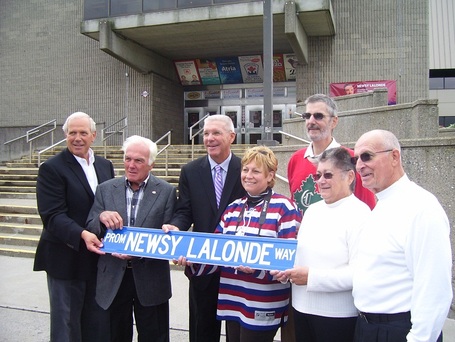 If there was one part of the day I will forever savour, it is sitting at the luncheon table with family members and our two guests. The Hab legends queried us all about Newsy, while our questions regarded them. The Newsy family scrapbook was pulled out, momentos shown around. One photo featured a 70-something Newsy and his lifelong pal Battleship Leduc posing for a photo with the Rocket, among others. Henri looked at the photo and stated that he knew the location of the shot, saying he was a member of that particular golf course where it was taken. Information on the picture's flip proved him right.

We all had a good laugh when Sharon accidentally referred to Maurice as Henri's father, before quickly correcting herself. It wasn't fast enough though, to prevent the Pocket from feigning mock offense.

I knew I could save Sharon here!

Sharp as a whip, Pocket replied in the affirmative.

As everyone looked around puzzled, I explained Henri's birthdate - February 29, 1936. Seventy-four in years, but as a leap year baby, technically eighteen.

That notion of an eighteen year old Pocket Rocket, on a day where our tales of Newsy made him young again as well, brought a fitting close to our afternoon. It was certainly an appropriate closing note, seeing as how sitting and chatting with this pair turned everyone n the family into children all over again.

May that joie stay with them! 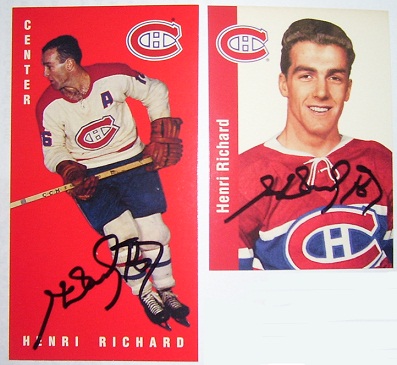 You decide, which of these two gets sent to Ian Cobb for the Habs Inside out raffle? 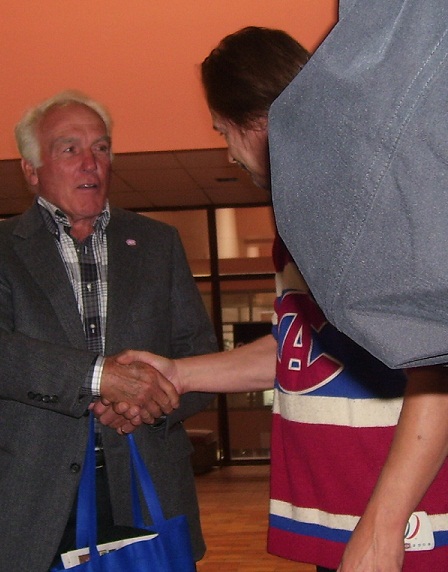 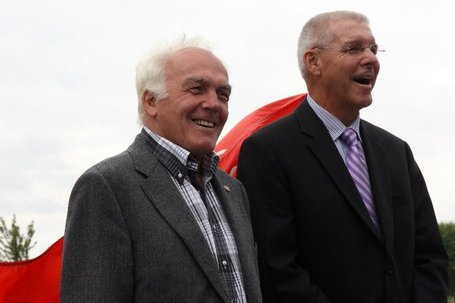 The best comedy team since Brunet and Demers! 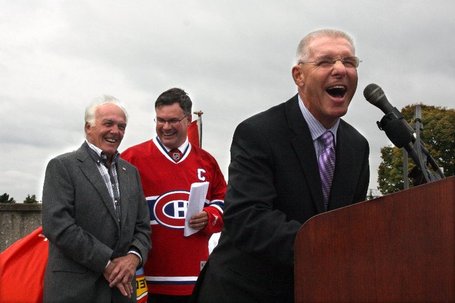 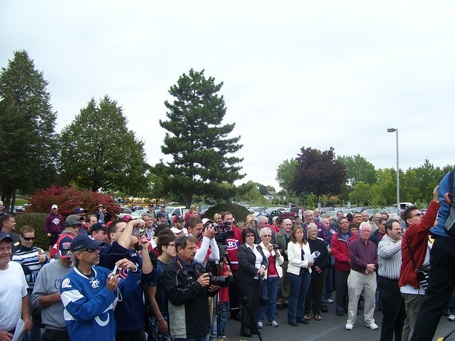 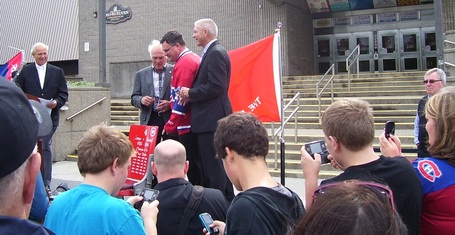 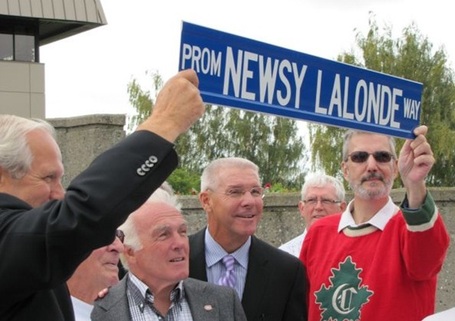 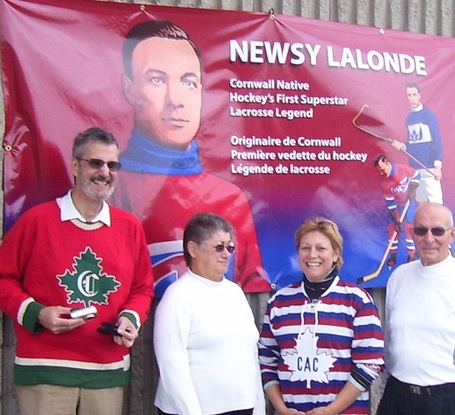