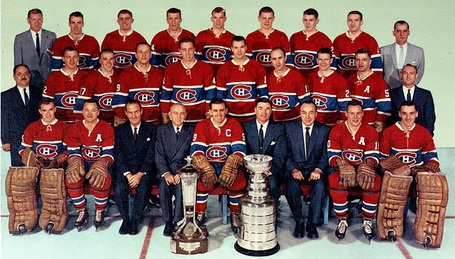 In 1960, the Montreal Canadiens won an unprecedented fifth straight Stanley Cup. In fifty hockey seasons since that time, the record has been threatened but twice: first by the Canadiens themselves in 1980, and by the New York Islanders in 1984. Since then, no hockey club has managed to win three successive Cups, and the term dynasty has been reduced to referring to back to back Cup champions, a rarity in itself in these days.

In Day 14 of the Eyes On A Dynasty series, we take a look at this historical moment in its then present tense, with four clips showing that everyone involved, from players to management to commentators, were somewhat oblivious to the historical precedent being set at that time.

Both hockey, the game itself, and the coverage of it, have come a long way, since the 1950's. The Eyes On A Dynasty series has now travelled a good thirty years back through time. Doesn't all of this make you wish you had your own time machine?

The defending champion Stanley Cup Montreal Canadiens appeared in their tenth consecutive Final series in 1960, a rematch of the 1959 Final against the Toronto Maple Leafs. The Canadiens won the series in four games to capture their fifth straight Cup victory.

The Canadiens' fiftieth season of their existence was an eventful one for several reasons. Boasting an array of talent unforeseen in hockey history, the Habs depth allows them the luxury to replace injured elements with ease and steamroll the competition during the regular season.

Apart from the team winning its precedent setting fifth straight Stanley Cup, the most eventful happening occurred on the night of November 1 at Madison Square Gardens. Goalie Jacques Plante, struck in the face by a purposeful Andy Bathgate wrister, returned to the game donning a mask for the first time in NHL history.

Plante, who won a fifth successive Vezina Trophy in 1960, had been wearing the facial protection in practice for a few years, and from this point on steadfastly refused to play without it. All eyes were focused on the greatest goalie in the game, with curious observers and cynics prepared to declare the mask experiment a success or a failure. Once Plante had gone undefeated in his next 11 games, the mask was in the game for good. It would just one more of the many ways the revolutionary Plante altered the perception of the goaltending position during his career. Goalies throughout the hockey world would soon follow his boldest stroke within a few years.

The third place Chicago Blackhawks, the Canadiens' first round opponents, were a much improvement club over the past two seasons. Art Ross Trophy winner Bobby Hull, the game's most feared marksman was a focus of the Habs entering the series, and was grounded to a standsill by the effective checking of grinder Claude Provost.

Plante is a little shaky in the first two games at the Forum, but the Habs prevail by identical scores of 4-3 - with Game Two coming to a close by way of a Doug Harvey overtime winner. Plante is stellar in the first period of Game Three in Chicago, as the Blackhawks pepper him with a dozen shots. The game is thirty minutes old when Bill Hicke opens the scoring, followed by a rare Jean Guy Talbot marker six minutes later. From there, Montreal puts the clamp on the Hawks game, limiting them to only four third period shots on the way to an efficient 4-0 whitewash. Two nights later, Provost and Moore net second period goals, and the ever stingy Plante outduels Glenn Hall for a Canadiens' series wrap in four.

In winning 10 of 14 games against Toronto during the regular season, the Canadiens and the hockey world at large weren't giving the Leafs much chance at an upset in their second straight Finals meeting with Montreal. While Toronto were in the midst of building a strong and young core around the likes of Frank Mahovlich, Dick Duff, Carl Brewer, Billy Harris and Bob Baun, they were still a few seasons away from becoming a considerable threat.

In Game One of the Finals, the Canadiens burst out of the gate, riffling three quick goals before the contest is twelve minutes old. They would unleash 42 shots on Toronto goalie Johnny Bower, finishing up with a 4-2 win. The second game is a closer affair, with all the game's scoring done in the first period. Moore and Beliveau score early goals for Montreal, and Larry Regan nets the Leafs lone marker late in the period. Bower and Plante are impenetrable the rest of the way.

The Leafs match the Canadiens chance for chance in Game Three in Toronto, but Plante is the better of two stoppers. Marshall, Goyette and Henri Richard pace the Habs to a 3-1 lead after two. Goyette adds a second goal in the final frame before Maurice Richard scores his lone goal of the playoffs. As Rocket retrieves the puck from the goal, Toronto fans, thinking they have perhaps witnessed the last goal of his career, salute the Habs legend with a standing ovation. A Bert Oldstead goal with 13 seconds left makes it a 5-2 final. 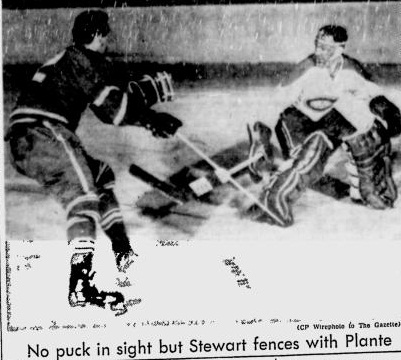 Poised for a fifth Cup win, the Canadiens hit the ice in game four with purpose. Fifteen shots are directed at Bower in the opening frame, as Beliveau and Moore provide Montreal with what will prove to be an insurmountable lead. The Pocket Rocket and Beliveau once more, make it four for the Canadiens, while the masked Plante turns away 30 shots for his third road playoff shutout of the post season.

In sweeping the Maple Leafs, Montreal outscored them 15 to 5, becoming the first team since the 1952 Red Wings to go without a playoffs loss. The final game in Toronto would be the last of Maurice Richard's illustrious career. His final goal, scored in Game Three against the Leafs, was his 34th career goal scored in a Stanley Cup finals series. Incredibly, the Canadiens scored first in all eight of their post season wins, and never once trailed in a game.

The '56 to '60 Canadiens were the best team ever assembled. Hockey would never again witness a five time Stanley Cup champion team.

Text edited in part from the 1960 Stanley Cup entries at Wiki and Canadiens.com.

Here are highlights from Game 2 of the series, a close 2-1 Canadiens win.

Game 4 was the most one-sided contest of the final round, likely because the Leafs knew their collective gooses were cooked!

This is a treat for 1960, rare colour highlights of the entire series.

The fourth and final clip is something you may never live to see again in your lifetime - post game celebrations and interviews for a five time Stanley Cup champion team.

The celebrations begin with the presentation of the Cup to captain Maurice Rocket Richard, who is hugging the mug for a final time, as NHL president Clarence Campbell makes announcements. Who wouldn't have loved to be a fly on that Cup, considering the feelings between the two?

In the clip, it's quite a faint sound in the background, but if you listen well as the Rocket begins his short speech, Toronto hockey fans, knowing they are witness to an unprecedented moment, are giving the Richard and the Canadiens a tremendous and respectable show of appreciation. Richard knows and acknowledges this, as he begins his thank-yous.

From there, Rene Lecavalier, and Danny Gallivan, who were there from the beginning of televised hockey, along with Ward Cornell, interview the Richard, coach Blake, Jacques Plante, Hartland Molson and Frank Selke. Bill and Foster Hewitt, as well as Frank Selke Jr., pitch in with their own words, while assessing this historical win. 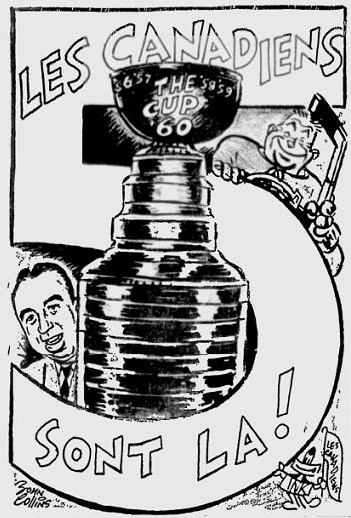 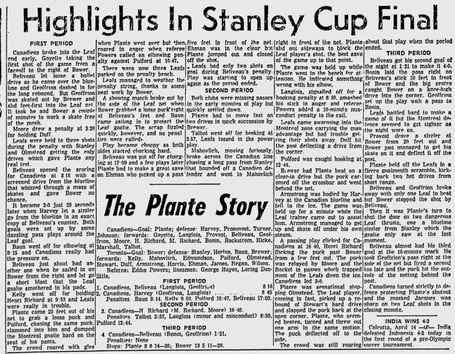 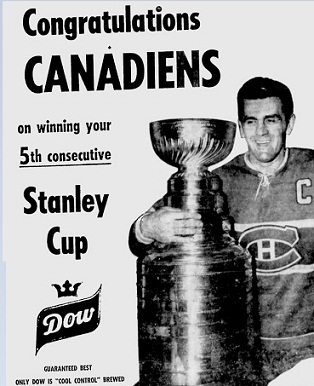