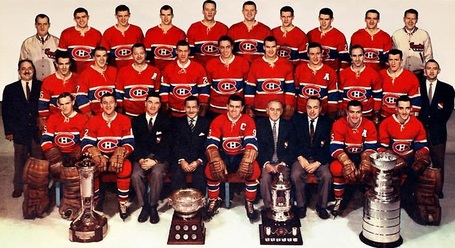 In the spring of 1959, the Canadiens were going for an unprecedented fourth straight Stanley Cup, and most onlookers felt they would be unstoppable. The Blackhawks and Maple Leafs, both enjoying a resurgence, did not see things as being so cut and dried, and they gave the Canadiens all they were worth. On Day 12 of the Eyes On A Dynasty series, we take a look at incomparable season finale filled with unlikely heroes.

The 1959 Stanley Cup was contested by the three time defending champion Canadiens and the Toronto Maple Leafs, whose consecutive Cup wins record Montreal had equalled one year earlier. Montreal were making their record ninth straight appearance in the finals and it was Toronto's first final appearance since defeating Montreal in five games in 1951. The Habs would win the series in five games to establish a new record for consecutive Cup wins. Montreal defeated the Chicago Black Hawks four games to two to reach the finals while Toronto defeated the Boston Bruins in seven games.

Contrary to the 1957-58 campaign, the Canadiens were relatively healthy, and counted for a league record 258 goals during the regular season. They were lead by left winger Dickie Moore, who captured a second running Art Ross trophy while establishing a new NHL high for points with 96. Jean Beliveau, healthy once more, set a career high mark with 91 points, bettering his previously held NHL record for points by a centermen.

Goalie Jacques Plante, appearing in a career high 67 games, won his fourth straight Vezina Trophy, matching a feat previously held by the Canadiens Bill Durnan (1944 to 1947). Ralph Backstrom, with 18 goals and 40 points, won the Calder Trophy as rookie of the year - an impressive accomplishment considering he was a third line pivot playing behind the likes of Beliveau and Henri Richard.

Doug Harvey, hampered by injuries despite suiting up for 61 games, saw his Norris Trophy winning streak end at four. Teammate Tom Johnson, on the strength of a 10 goal, 39 point campaign, helped maintain the Habs' streak of Norris wins at five.

Hardest hit by injuries was the 37 year old Rocket Richard. Limited to 42 games, Richard nonetheless contributed 17-21-38 totals, but was not a factor come playoff time.

The road to the Montreal Canadiens 12th Stanley Cup had eleven stops along the way, against adversaries who had failed to make the playoffs in 1958. Semi-final opponents, the 3rd place Blackhawks stretched Montreal to six games, winning games three and four at the rowdy Chicago Stadium to tie the series before dropping the final two contests.

Canadiens center Jean Beliveau was lost for the balance of the playoffs after a Game Three injury, and with Rocket Richard yet to assume his position, the scoring slack was taken up by winger Marcel Bonin. Acquired from Detroit prior to the 1957-58 campaign, Bonin exploded in the 1959 post season, going on to count 10 goals and 15 points in 11 games. Much of the credit for Bonin's sudden offensive spark was given to the fact that he had borrowed the injured Rocket Richard's gloves while scoring 12 points in his first 7 playoff games.

Winning the opener 5-3 after a Bonin goal broke a 3-3 deadlock, Montreal took Game Two at the Forum by a 3-1 score, as winger Claude Provost stepped forth with a pair of goals. The second game also saw the return of the Rocket to the lineup, but he would go scoreless in the final four games of the playoffs.

Toronto avoided an 0-3 deficit at Maple Leaf Gardens, winning the third game 3-2 in overtime thanks to a goal by Dick Duff. The fourth game saw Toronto match the Canadiens chance for chance, after two scoreless periods. Not long after the Leafs' Billy Harris opened the scoring, the Canadiens replied with Ab McDonald, Backstrom and Geoffrion putting three quick third period goals past Leafs' stopper Johnny Bower. Montreal hung on for a 3-2 win, and they would return to the Forum one win away from a precedent setting fourth straight Stanley Cup.

The Canadiens killer instinct clearly manifested itself in Game Five, as they erupted to a 3-0 first period lead on goals by Backstrom, Geoffrion and Johnson. The Leafs clawed back, but to no avail, with Geoffrion's second marker proving to be the eventual winner in a 5-3 game.

The Canadiens fourth straight Stanley Cup bettered the Toronto run one decade earlier, but the Habs weren’t quite finished with their monopoly of Lord Stanley’s mug.

Text edited in part from the 1959 Stanley Cup entries at Wiki and Canadiens.com.

In this first video clip, we see a quick recap of the Chicago series with some great highlight goals. There is word that an injury sustained by Jean Beliveau has knocked him out of the playoffs. We then see coach Toe Blake's infamous "predictions are for gypsies" quote before moving onto the final series five games highlights.

The second clip shown here are highlight from game 5 itself, starting with the old Imperial Oil intro to Hockey Night In Canada. Here we get to see what a promising prospect young Ralph Backstrom was. and how Leafs' goalie Johnny Bower just could not handle Boomer Geoffrion's blasts.

The third clip shows a brief few final scenes at the end of Game 5, as they Canadiens carry the Cup back into their dressing room. You gotta love Henri Richard's champagne bath face dunk into the Stanley's mug! 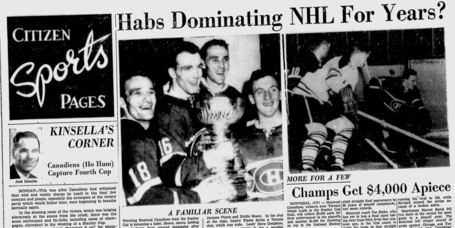 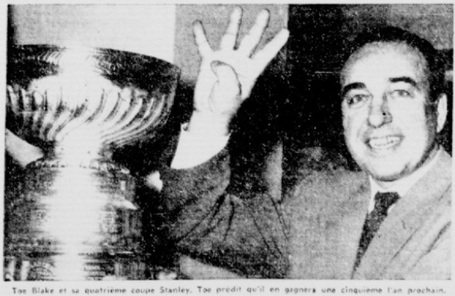 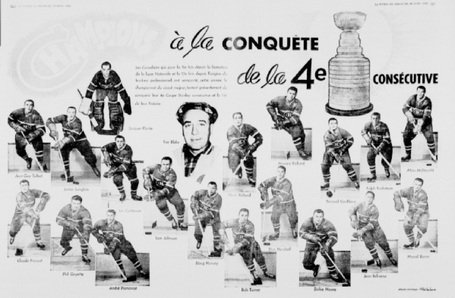