The Canadiens third successive Stanley Cup in 1958 was in many ways the most difficult to achieve for the team in light of the numerous injuries to several key players. Despite being set back, it is in this season that the Canadiens showed a heretofore unseen resilience, with players stepping up like never before. On Day 10 of the Eyes On A Dynasty series, we take a look a what I personal feel was the best of the five editions of Cup winners between 1956 and 1960.

Injuries plague the Canadiens more in the 1957-58 season than in any previous campaign. Beliveau, Geoffrion, Plante and Maurice Richard miss close to 100 regular season games. Of the four, Geoffrion’s life-threatening bowel rupture is the most serious. To compensate, lines are contunuously shuffled but some of the team’s younger players up to carry the Habs to a first place finish. By season's end, with the Canadiens' league most offensive club yet again, they ar ready for the post season with the return of all their injured warriors.

Beginning the playoffs with a healthy squad firing on all cylinders, Montreal’s first opponents are the third place Detroit Red Wings. A crushing 8-1 defeat in the opening game sets the tone for the series. It takes a minimum four games to send Detroit on summer vacation. Montreal enjoy a week off while fourth place Boston finishes off the Rangers.

In the 1958 regular season, the Canadiens made amends against the almost prickly Bruins, winning 9 of 14 games, as opposed to only four one season prior. Testament to the fact that the playoffs are a different season altogether, the Bruins would prove just as difficult an opponent as any that the Canadiens faced in the last three springs.

After unloading their artiliary for 14 goals in the final two games against New York, the Bruins manage to put only one goal past a solid Jacques Plante in Game One - a 2-1 margin for the Canadiens. The Bruins rebound in Game Two by a 5-3 score. In Boston for the third game, Plante returns to flawless form as the Richard brothers account for all the offense in a 3-0 win. The Bruins again show resilience, downing the Habs 3-1 at the Garden in Game Four.

The fifth game back at the Forum proves to be the closest of the series and requires overtime to settle the 2-2 deadlock. Five minutes into the extra period, Rocket Richard provides the heroics, putting the Canadiens within a win of a record tying third straight Stanley Cup. Immediately after the victory, coach Toe Blake begins to stress the importance of a strong start to Game Six in Boston and his troops do not disappoint, as Geoffrion and the Rocket score before the game is two minutes old. Beliveau makes it 3-1 before the Boomer adds a second tally on the night, but the Bruins, fighting for their lives, score two in the third to narrow the gap. Going for broke, Boston pull goalie Don Simmons, but defeneman Doug Harvey, taking no chances, skates down ice to pot the insurance goal with exactly one minute on the clock.

The Canadiens most trying season ends with a third consecutive Stanley Cup, matching the streak set by the 1949 Toronto Maple Leafs. For a still improving Canadiens club, the 1958-59 season would be a pivotal campaign.

You can read more about the Rocket's trying 1958 season in tomorrow's installment of the Eyes On A Dynasty series.

Text edited from the 1958 Stanley Cup entries at Wiki and Canadiens.com. 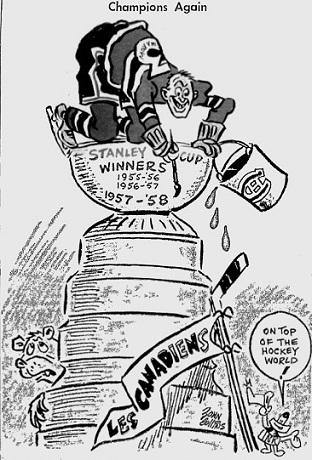 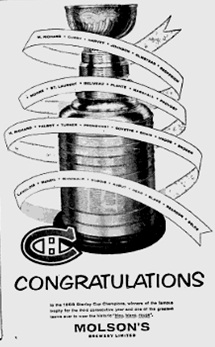